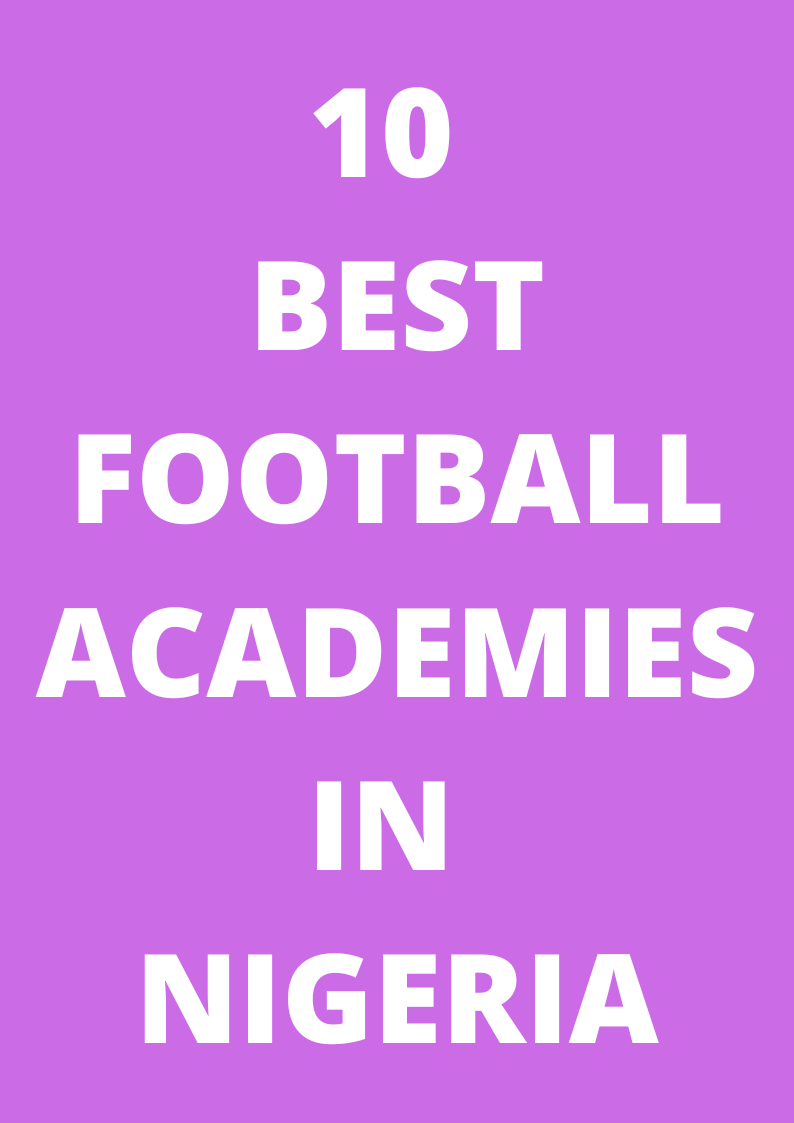 Are you a talented football player in Nigeria and you aspire to play on the intentional level? Do you want to become the next Jay Jay Okocha, Kanu Nwankwo, Mikel Obi, Kelechi Iheanacho etc. Then your best chance of making it is to join one of the best football academies in Nigeria. Joining one of the best football academies in Nigeria is your best route not just because they have the facilities and expert coaches to develop your technical abilities but also because most of them have affiliation with some European clubs which will enhance your chances of moving over to Europe. And I guess this is the ultimate dream of every aspiring young footballer in Nigeria today.

So if you are here and you are wondering which is the best football academies in Nigeria as at 2022 to enhance your football development then this post is for you.It is true that for many decades Nigeria has not done so well in building standard academies as it is in Europe despite the abundance of raw talents in the countries. But that is gradually changing. And this post has done the hard job of critically analyzing all we have on ground to come up with this 10 as the best football academies in Nigeria as at 2022.

What is Football Academy

Football Academy is an organized institution set up for the primary purpose of developing football talents. It is just like a college, but the primary focus is to help discover, refine and develop raw football talents. Some of the best football academies in Nigeria have boarding facilities where the young footballers live in the premises and take part in all the footballing activities as scheduled. In a similar vein some of them provide educational support to their players, such that they combine football with their education.

Criteria for Selecting the Best Football Academies in Nigeria

There are a number of football academies in Nigeria, but we have selected the best 10 based on the following criteria:

Regarded as the best of the best and indeed most prestigious of all the football academies in Nigeria, Pepsi Football Academy has remained relevant since it was first founded in 1992. The academy is reputed for its prowess in giving footballing opportunities to the younger generation as well as for providing world-class development and enhancement to grassroot football players with dream to play and excel at the highest level.

The Football Academy received full sponsorship from soft drink giant Pepsi in 1994 and is open to children aged 5-18 years. And it is also open to both genders with a dream to play football at the highest level.

The academy which first started in Agege Stadium Lagos, now boasts of 54 qualified coaches and exists in about 12 other locations in Nigeria.

For many years Pepsi Football Academy was under the leadership of Late Kashimawo Laloko as the technical director for many years and he helped shaped the academy and those that passed through it in the late 90s and early 2000s.

Pepsi Football Academy has produced some of the most notable names in Nigeria football in the last 10 – 15 years and some of them are listed below:

According to nigerianelitesforum.com here are confirmed Pepsi Football Academy locations and their contacts nationwide:

However, there are many people who believe that Pepsi Football Academy is only living in past glory now. And with more academies coming up they need to wake up.

The second name on our list of the best football academies in Nigeria is Kwara Football Academy. The academy which was founded in 2005 is an initiative of the Former Kwara State Governor, Dr. Bukola Saraki. It has boarding facilities with the capacity to accommodate about 300 young persons. The academy is open to young people between the ages of 10 and 20.  It currently has seven coaches who are all former international football players with coaching certificates.

Some of the major headlines by Kwara Football Academy include:

Third on our list of best football academies in Nigeria is Abuja Football College. The academy started in January 2012. It was established by Gabriele Volpi, the chairman of Orlean Invest Africa Limited and a FIFA Licensed instructor in conjunction with Haruna Abba.

The AFC had won many competitions ever since it came into the limelight. The popular among them was the under 20 competition where the academy became giant killers defeating the likes of Pepsi Football Academy and Kwara Football Academy to claim the trophy.

The age range for joining the academy is 14 – 17 years old. The academy with 7 coaches (4 European coaches and 3 Nigerian coaches) operates on full scholarship. From accommodation to feeding to stipends are all taken care of by the management.

The academy has her camp in Sunnyville Estate Abuja but trains at the National Stadium Package B in Abuja.

How to Start a Football Academy in Nigeria (2022)

Advantages of Starting a Business as a Teenager

Midas Football Academy is another one on our list of best football academies in Nigeria. The academy was formed in November 2006 to discover young soccer talents in Nigeria and the rest of Africa and make them better persons in the society. The academy is duly registered and affiliated with the Nigeria Football Federation and Lagos state Football Association. It equally have international affliation that makes it possible to submit names of academy players to scouts across the globe.

Information gathered from the academy official website has it that with the academy network of international football clubs and football management organisations around the world, it has been helping young players with opportunities to showcase their talents to football coaches, agents and scouts from all over Europe, Asia, North Africa and the Americas.

Barcelona Football Academy otherwise known as FCBESCOLA is an international academy with affiliates in different countries of the world. Though this academy was just established recently in Lagos Nigeria, precisely on November 16, 2016 yet we have included it here based on the prestige of the parent club FC Barcelona of Spain. The academy is open to young boys between the ages of 6 and 18. In Lagos the academy is under the leadership of Mr. Bernat Villa as the Technical Director. While Mr. Leslie Oghomiernor the Chief Executive Officer of Blaugrana Sports International, a licence holder of FCBESCOLA Soccer School remains the administrative head.

Pedro Rodriguez and many more

Our hope and prayer is that through this academy Nigerian football will one day produce the likes of Messi, Xavi, Fabregas and subsequently Super Eagles will start performing as they should.

As the name implies, the football academy is owned by one of the greatest footballers in Nigeria, Nwankwo Kanu. You will recall that the two time African footballer of the year had a well decorated career from Ajax FC where he won the UEFA Champions League, to Inter Milan, to  Arsenal Football Club of England where he won the Premier League and the FA Cup. Kanu also played for Portsmouth and West Bromich Albion in England before his retirement.

Papilo Football Academy was established in 2000 and is based in Owerri, Imo State.

Since inception, Papilo FC has made its mark in the Nigeria footballing space, and some of their major achievements include:

The idea behind the establishment of the academy is to train and explore young football talents and exciting their potential for greater opportunities in the football industry.The academy is committed to providing excellent basic and advanced football instruction, in a safe and peaceful environment, where the players will have an enjoyable, positive learning experience to adequately prepare them to face the challenges of a successful life and a professional football career.

What to expect when you join Siaone Soccer Academy

Lagos Tigers Football Club (LTFC) is a rapidly growing junior football club/soccer school based in Lekki. It was established in 2012, for boys and girls between the ages 3 to 15 years to fill the gap of quality football training for the youth. Our club members are trained by a team of qualified coaches who have extensive experience working with children. At LTFC, we encourage and foster good sportsmanship, discipline and build confidence and integrity. We recognize and develop the players’ individual strengths as well as encourage teamwork through fun play and technical training.

Since 2012, when LTFC began with just 5 members, over 200 children have been registered and trained with us. We expect this number to increase steadily given the revival for sports and healthy living in the country.

The AS Roma Academy Abuja is the AS Roma Academy official network of football schools around the world dedicated to all boys and girls, aged between 5 – 17 years old, which offers the opportunity to learn the methodologies and training techniques that inspired talented players such as Francesco Totti, Daniele De Rossi, Alessandro Florenzi and Lorenzo Pellegrini. 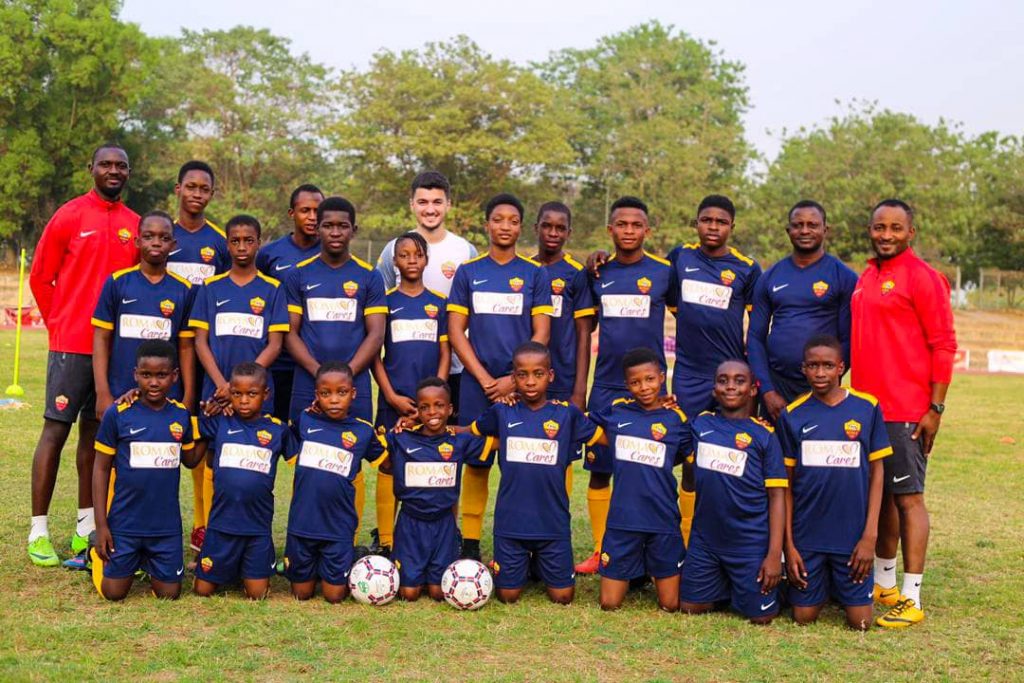 Recognised throughout the world for the quality of its youth team, our AS Roma International Academy program stands for our dedication to training young players in sports and education, transmitting the club’s work philosophy and values to the rest of the world.

Buruj Sports Academy completes our list of the best football academies in Nigeria. The academy remains one of the best options to any player aspiring to be great in their respective sporting career with no form of discrimination and limiting barriers to what each players stand to achieve.

Buruj Sports Academy is not just about football. It encompasses other sports like Athletics, Basketball, Cycling, Table Tennis and Lawn Tennis games.

The vision is to give young players a proactive platform to develop their skills and potential as a prerequisite to becoming thorough-bred professionals to fit in the National Team focusing widely on the grassroot level.

The goal is to ensure that young resourceful players are given the chance to get exposure and develop by creating varieties of opportunities for them to be in the right place under a right atmosphere to excel via global exploit participating in both International and Local Tourneys and Trials.

BSA players have participated in International Tournaments attended by players from over 20 countries yearly as organized by the UK’s No 1 Leading Sports and Tour organizer Team Tours Direct.

The players performances abroad had wowed the organizers and equally satisfied the thirst of notable club scouts in search of young talents to recruit i.e., Manchester United, Everton.

This have also awarded some of the players a scholarship opportunity in Clubs like Barnet F.C, Borehamwood F.C after successful trials.

Two players namely Salaudeen Noah Abolaji, and Akuba Ignatius Omachonualso got a scholarship from Borehamwood Football Club in 2017 and 2018.

Before we end here once again are the 10 best football academies in Nigeria by popular opinion:

Now, Your Opinion on the best football academies in Nigeria

We have listed the 10  best football academies in Nigeria based on certain criteria. Do you agree with us? Are there some very good academies in Nigeria that we have left behind? Maybe there is one or two in your area that this post did not capture, kindly let us know about them.  The comment section is open for your input. Thank you.