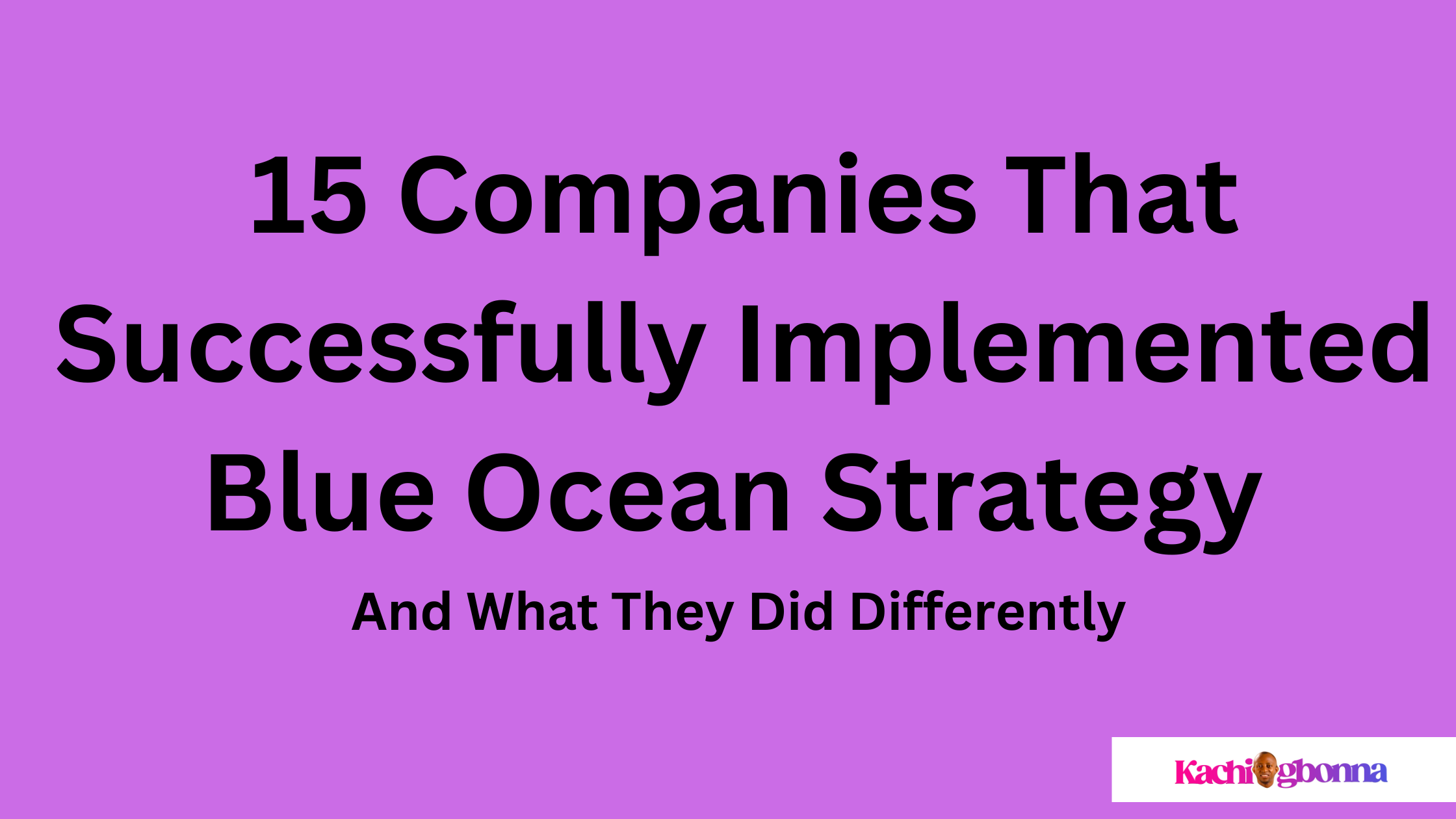 Examples of companies that have successfully implemented a blue ocean strategy are listed below:

Circque du Soleil is a Canadian entertainment company and the largest contemporary circus producer in the world. The company founded in Baie-Saint-Paul on 16 June 1984 is located in the inner-city area of Saint-Michel. The founder is former street performers Guy Laliberté and Gilles Ste-Croix.

Why is Cirque du Soleil referred to as an example of blue ocean strategy?

Iti s because it did something simple yet game changing.

It created a new market in the entertainment industry by blending elements of the circus with theater, dance, and live music. So it simply took a couple of things that were and made out of them something that does not exist.

Today the brand creates content for a broad range of audacious projects. On top of producing world-renowned shows, the organization has extended its creative approach to a large variety of entertainment forms. Some of them are:

If there is one good example of a company that successfully implemented the blue ocean strategy, it is Circque du Soleil.

Lego is a Danish toy production company based in Billund, Denmark. It manufactures Lego-brand toys, consisting mostly of interlocking plastic bricks. The Lego Group has also built several amusement parks around the world, each known as Legoland, and operates numerous retail stores as well.

Lego rewrote the rule of innovation by expanding beyond its traditional toy market. Then it started creating themed sets, such as Harry Potter and Star Wars. Finally it started diversifying into video games, movies, and theme parks.

Natura a Brazilian cosmetics company. It successfully implemented the the blue ocean strategy by that producing cosmetics that focused on using natural and sustainable ingredients. It equally incorporated social and environmental responsibilities into its business model.

Apple is another great example of a company that successfully implemented blue ocean strategy in the midst of deep red ocean.  It did this with its iTunes music download service. While billions of music files were being downloaded each month illegally, Apple created the first legal format for downloading music in 2003.

It was easy to use, providing users with the ability to buy individual songs at a reasonable price. Apple won over millions of music listeners who had been pirating music by offering higher-quality sound along with search and navigation functions. Apple made iTunes a win-win-win for the music producers, music listeners, and Apple by creating a new stream of revenue from a new market while providing more convenient access to music.

That innovation led to the creation of a new market in the personal technology industry with its innovative products such as the iPod, iPhone, and iPad.

Southwest Airlines Co. is one of the major airlines of the United States and the world’s largest low-cost carrier. With its headquarters in Dallas, Texas, the airline has scheduled service to 121 destinations in the United States alone. Additionally, it also flies to 10 other countries around the world.

Why is Southwest Airline considered to have successfully implemented blue ocean strategy?

At a time when air travel was the exclusive right of the rich and super rich, Southwest decided to create a new market. It came with the mantra of “democratizing the sky through friendly, reliable and low-cost air travels”.

All over the world, the airline is known for focusing on low-cost, short-haul flights and excellent customer service.

It is such a blue ocean strategy that worked to perfection as today, the company carries more air travelers flying nonstop within the United States than any other airline.

IKEA is a Swedish multinational conglomerate. However the brand’s headquarter is in Netherlands. The company designs and sells ready-to-assemble furniture, kitchen appliances, decoration, home accessories, and various other goods and home services. IKEA has been the world’s largest furniture retailer since 2008.

The blue ocean strategy that IKEA brought which didn’t only revolutionized the furniture industry but also endeared customers to it is the offering of stylish and affordable furniture that could be easily assembled by customers. It proved to be the game changer.

Another example of a company that looked beyond the red and saturated ocean and created a pure blue ocean in its industry is Netflix. Netflix is a company that reinvented the entertainment industry in the 2000s. Rather than try to win a substantial market share of the competitive marketplace of video rental stores, Netflix created new models of entertainment. First it introduced mail-order video rentals. Then later it pioneered the first streaming video platform in the world paid for by user subscriptions.

Following their success, many other companies have followed in Netflix’s footsteps. As a result, any new company trying to launch a video subscription model will find itself facing a red ocean.

The company created a new market in the car audio industry by developing high-quality, premium sound systems for luxury vehicles. It has however been an independent subsidiary of Samsung Electronics since 2017.

What Virgin Atlantic Airline did was very simple. It decided to create a new market in the airline industry. That market focused on offering a more upscale and personalized experience for passengers. And it has since proved to be a big hit.

What do we know about Red Bull that gave it its place among the companies that successfully implemented the blue ocean strategy? It is that it went into the energy drink industry and created a new market by positioning itself as a premium product. It also started investing heavily in event sponsorship and extreme sports.

Today Red Bull is in a class of its own boasting 43% market share in the US market.

I don’t think I need to say much about this. But most of us knows the exploit of the Elon Musk led Tesla. How it created a new market in the automotive industry by producing electric cars that are not just of high-performance but also comes with a luxury appeal.

Starbucks created a new market in the coffee industry by offering a premium coffee experience with high-quality beans, personalized drinks, and a comfortable atmosphere. Today it is Starbucks and others.

Whole Foods Market also created a new market in the grocery industry by focusing on organic, natural, and locally sourced products. Yet, it was at the same time providing a high-end and upscale shopping experience.

The Cloud storage industry might be a common one today, but that is thanks to Dropbox that decided to create a blue ocean out of it. It started by offering an easy-to-use and accessible service for both personal and business use.

The last of the companies that successfully implemented blue ocean strategy that we are discussing here is Zara.

Zara created a new market in the fast-fashion industry by offering trendy and affordable clothing with a quick turnaround time from design to store shelves. The strategy immediately paid off as it quickly became one of the choice brands in a fashion-crazy world.

I made a crucial observation as I was going through the companies in this list before publishing it. Did you observe that blue ocean strategy can be applied in almost every industry? Did I just say ‘almost’? I mean it can be applied to absolutely any industry you can think of. It is all about think of the uncontested aspect of that industry and creating a new market therein.

It has happened in the entertainment industry, furniture company, electronics, airline, conglomerate and several others, so there is no limit to it.

The good news is that whenever a blue ocean strategy is correctly and successfully implemented a new global brand will be around the corner.

Let me also quickly state before we go that this is not an exhaustive list. There are still other companies that successfully implemented blue strategy other than the ones mentioned above. In fact, companies like BeReal, OnlyFans, ClubHouse and many others all applied blue ocean strategy one way or the other.