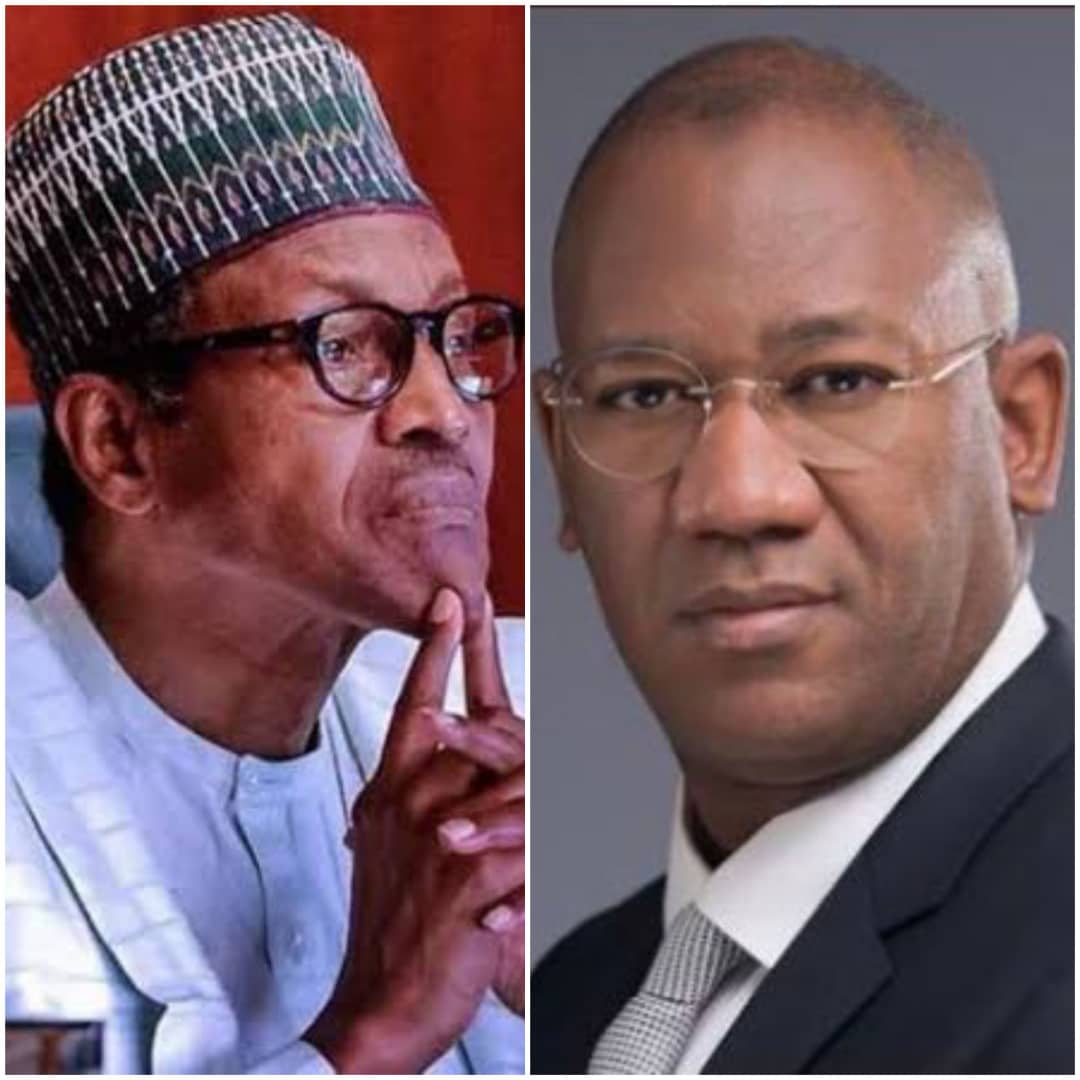 7 aspects of corruption Buhari does not understand plus my experience with my mother-in-law.

I had a small clash with my mother-in-law during the build up to my traditional marriage. I was just a young man still starting life but I was determined to get married once I found the woman meant for me. So financially speaking I knew I wasn’t quite stable then. Her beauty alone wouldn’t let me wait, before another man hijack her.

My plan was simple – plan my wedding on budget. Fortunately I got some financial support from family and friends. So I wanted to limit my expenses as much as possible.

I told my mother-in-law that I will like to have a good wedding based on my budget. But as for the traditional marriage that it will be on a ‘small scale’. She supported the idea 100% knowing fully my financial strength.

So we began preparations. I sent her N50,000 to prepare food for the 10 people I will be bringing plus whatever number of people that will be coming from her end. My mother-in-law called and was like, what was that money for? After I finished explaining, she just laughed? She was like…what exactly can N50,000 do? Is it for canopy, DJ, decoration or the food itself?

To say that I was shocked was an understatement. I asked her who the canopy, decoration, DJ and all that was for. And she was like, “were you proposing an event where people will come and stand under the sun/rain, or were you thinking it is a place of mourning such that there won’t be any sort of music at all?” She insisted that it was still a small event, but that those things are just necessary.

I couldn’t Convince Her

Unfortunately, I couldn’t convince her to drop all those things and allow us stay in the sitting room and settle the traditional list. Then I called my elder brother and reported the matter to him. I told him that my mother-in-law was looking for my trouble and that she wants to put me on high jump. After explaining the issue, he told me that it is my fault. My goodness! That was the last thing I was expecting to hear from him. How could it be my fault that I was been honest about what I can afford? He then explained. “Kachi it is your fault, you told your mother-in-law you wanted a small event and she also agreed to it, but your definition of the word ‘small’ differs.

Your definition of small is N50,000. But her own definition of small might be N250,000”. I melted at that insight. I couldn’t say a word further. My brother went further to advised that the next time I am having this kind of discussion I should go ahead and explain what each term represents. I agreed and asked what I should do now. He said, “go ahead and give your mother-in-law the amount she is demanding for”.

Obviously I was never going to give that because I didn’t have it anywhere. So I called my mother-in-law back to negotiate with her and she accepted I should send N150,000 let her see how to make it up. That was how I went to squeeze myself to raise extra N100,000 I did not plan for.

What was the problem here? We had different definitions for the word ‘small’ and we forgot to ask each other for our definition of ‘small’.

Buhari Played the Same Card About Corruption on Nigerians

Just like in my case with my mother-in-law Buhari feel he is doing his best, but Nigerians are disappointed. Remember I felt I was doing my best with 50k then (after all a bag of rice then was 18k and not yet 36k as it is today).

The truth is that if Nigerians had asked Buhari to define what corruption meant to him, he probably would have told them that clearing grass with 500 million naira is not corruption. After all, a former president once said that ‘stealing is not corruption‘. And there is really nothing wrong with saying so as long as the two parties agree to that. As a matter of fact, saying that only helps you as a person to reduce your expectations. If Nigerians have asked Buhari to define corruption perhaps they would have known that it is okay to buy a party presidential primary ticket with N100m even when your 8 years salary won’t be up to that.

Baba-Ahmed, the vice presidential candidate of Labour Party insists that Buhari don’t know what is called corruption when he told Nigerians that he was coming to fight it. He said that there are seven areas of corruption that Buhari does not understand.

7 Aspects of Corruption Buhari Does Not Understand

So today, I want to share with you the 7 aspects of corruption Buhari does not understand as postulated by Dr. Baba-Ahmed.

“For all the years that Buhari said he has been fighting corruption, I can tell you that I have never heard him say anything that shows he understands how corruption is perpetrated in Nigeria. Very quickly I will share with you seven different ways of perpetrating corruption in Nigeria”.

Also Read: How Rich is Nigeria – A Nation of Corruption Without Boundaries?

According to Baba-Ahmed inflated government contract is responsible for 55 to 65% of all the quantum of corruption in Nigeria. And I completely agree with Baba-Ahmed on this. This is a country where school children are fed with One billion naira daily. That figure is quoted because it is a contract and oftentimes an individual has an interest.The quotation says they need 100 naira per child and that they will feed 10 million people per day.

But in reality the cost of that feeding realistically speaking should just be about 5% of that figure. But if you believe that is corruption then wait until you hear how much is actually spent on that job. In practice most contractors in Nigeria will end up spending 2 million naira on that feeding.Unfortunately that is a very common practice in Nigeria. And I will be glad to hear someone come out and tell me how many times Buhari has come out to condemn this as corruption.

From FIRS, to NNPC, to NPA, to the electricity distribution companies you see government agencies and supposedly civil servants who are working for themselves. Sometimes I watch people that visit my office to collect electricity bill and I only wonder how much of the money they are collecting eventually gets to the government’s treasury. Once again we are yet to hear Buhari talk about this as a case of corruption that matters.

Can I ask you, how much is Passport in your area? How much is Drivers Licence in your area? And how much is the cost of vehicle particulars in your place? These are supposedly revenue sources for government, but how much of those amount collected from the public goes into government purse?

From the Police man on the road collecting money from drivers before allowing them to pass, to the secretary in public offices that you must give money before your file is moved, down to the multi-million dollar deals that are done before anyone could see the president.  Buhari has not seen these things as corruption. Who could hve believed that Policemen will still be confident enough to extort money from drivers with Buhari as president? But in fact, it got worse under his administration. Before Buhari became the president of Nigeria, Police were collecting 20 naira on the road. But today they collect, 50, 100 or even 200 naira.

In most government offices the issue of accountability or proper audit does not exist. So you see the people in charge of certain government properties easily converting them into their private properties. These even applies to some state governors that so easily allocate government lands, and institutions to themselves without any form of due process.

Go around and ask all over the states, ‘what do governors do with security votes?’ Bab-Ahmed believe this is another big aspect of corruption that Buhari is turning blind eyes to.

This includes the reckless and undue use of private jets and any other instruments of government. It includes creating unnecessary offices just to siphon money. Building of liaison offices and state governors quarters in Abuja falls into this category of corruption. How many aids goes with a governor for a meeting in Abuja? The state government will pay flight tickets, hotel accommodation and out of pocket for dozens of people who have no business whatsoever in Abuja. Buhari is not seeing this as corruption.

70% of corruptions are as a result of poor administration. Someone describes this as ‘man know man’. This is where nepotism easily comes in. But guess what it is the same Buhari who wants to fight corruption that has promised 5% and 95% respectively. Competence has been relegated to the background. But I guess it is no issue because Buhari never told anyone that nepotism is corruption.

Conclusion on Buhari’s Promise on Corruption

When Baba-Ahmend was reminded that many arrests have indeed been made under the Buhari administration he replied by saying that arresting someone does not address the issue of corruption. It may have addressed the criminality aspect, but not the corruption. According to Bab-Ahmed, corruption has become an institution under Buhari.

Do you agree with Dr. Datty Yusuf Baba-Ahmed that Buhari don’t understand these 7 aspects of corruption? Share your thought in the comment section. And if yyou have some corruption cases you wish to share, please do.