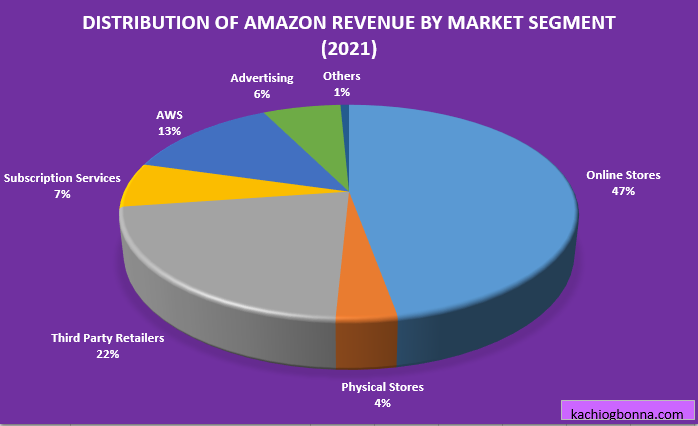 There is such a term as ‘the big 5 tech companies‘ in America. You can also call them the ‘American Tech Giants’. That term refers to the 5 biggest and most dominant tech companies in America. And guess what? Amazon is in the top 2 of that list.

Yes, Amazon, the American tech giant has become a one-stop place for everyone’s shopping needs. Be it electronics, clothing, furniture or other household appliances, you can be sure to get them on Amazon. No wonder it is called ‘the everything store’.

And how did Amazon manage to come this far in less than 3 decades? It is by constantly trying to sell its products at lesser prices. In fact, the founder of Amazon, Jeff Bezos once said, “There are two types of companies in the world, those that work to try to charge more and those that work to charge less. We will be the second.”

But the growth of Amazon from a small online store where people can order books to a brand with a revenue of over 400 billion dollars (2021) also has a lot to do with the business model it adopts.

As you must have guessed with several subsidiaries and hundreds of millions of customers today, the Amazon system and business model  is such a complex ecosystem.

So today, I will attempt to explain and help you understand every aspect of the Amazon business model. This understanding will position you on how best to build a disruptive system that could go ahead to be the ‘next Amazon’.

Therefore, with me on this voyage as we seek to grab a better understanding of the Amazon business model.

What is Amazon and What is It’s Business Model?

Amazon, an American tech company is an online marketplace that brings buyers and sellers together to sell and buy almost anything. It was founded by Jeff Bezos in 1994. But Amazon didn’t start as the colossus everything store we know it to be today. As at when it started it was a simple online store where people can sell books. In fact, most people didn’t think the idea made sense then because of low internet access. As a matter of fact, only about 0.447% of the world population had internet access then.

But Bezos was sure of the potential that internet holds. His vision was for a day when almost everything will have to be done online. A day when everyone will have access to the internet. Well, that day is not a long time coming, the day is here already.

From a relatively simple single-sided eCommerce platform, Amazon has grown into a complex digital ecosystem. The Amazon business model is not a single entity, but rather a portfolio of business models.

Amazon has rapidly changed, adapted and established itself as one of the biggest companies in history.  Today Amazon has incorporated various units within its business model, including a one-sided platform, two-sided marketplace, web services, kindle marketplace, an app store, prime video, game studio, and even retail stores called Amazon Go.

There are various products and services across different market segments that forms the current Amazon business model. And they have competed favourably in each of those markets. For each market they have a compelling value proposition that keeps customers glued to them.

So we look at the value proposition under each market segment.

Books on-demand, read on the go

AirBnB Business Model and How to Apply it Across Other Sectors

How Kuda Bank Lost Over ₦6 billion in 2021 Alone

Importance of Business Model and Why Your Business Needs One

Amazon have several market segments and each segment contributes significantly to the overall revenue of Amazon each year.

But its main source of revenue remains the marketplace and eCommerce stores which form the foundation for its other businesses.

However, the other market segments also contribute to the overall revenue of Amazon. So here is a list of Amazon’s revenue streams:

The core Amazon business model is still the heartbeat of its revenue. The majority of Amazon’s revenue (50% – 60%) still comes from the online marketplace.

Thanks to this e-readers series on Amazon, users can now buy, browse and download any newspaper, e-book, and magazine that want. All these are available at the Kindle Store.

The Kindle has been successful in winning over new users and converting them to buy Amazon products and content at an exceeding rate. Through this experience, users are then driven to opt for Prime. It usually comes with a Prime Trial which is free for approximately 30 days.

At one time the majority of the revenue generated came from the sale of books. In fact, that is where it all started. Although the strongest category is now consumer electronics, but books still contribute significantly.

Amazon Prime is the main subscription part of the Amazon business model. The number of subscribers to Amazon prme has been on the increase for a while. In fact, as at 2021, Amazon Prime had about 153 million subscribers. Even Netflix is beginning to take serious note of Amazon because of this.

In 2019, AWS grew by over 36%. AWS is used by many significant sized platforms such as Uber and Netflix. The company has a global IT infrastructure, but can equally be used by freelance developers or big global organizations. As a cloud infrastructure, it is extremely flexible and scalable. In fact most Email Marketing Consultants rely heavily on Amazon Web Services.

AWS continues to show strong growth and fits with the ongoing trend of digitization, growth in platforms and move to digital infrastructures by enterprises as they continue to digitally transform their businesses.

The Amazon business is underpinned by investments in technology. AWS has grown to become an ecosystem of developers that allows Amazon to understand how AI, Internet of Things (IOT) can be used and to invest in potential new ventures.

Amazon Business Model includes star websites like IMDB and twitch.tv. The Music and Videos also add to the revenue. These contribute to the subscriptions revenue stream you can see in the financial report below. IMDB supports people being able to profile actors while watching films and hence delivers a more unique experience.

Amazon has a strong range of products Fire products which include phones, tablets, Tv and Mobile OS.

Amazon Tickets was launched in the UK in 2015 and has since expanded to the US, Asia and the rest of Europe. Its global ticketing business is still a work in progress. However, this fits with their overall entertainment part of the business model. Amazon Tickets vision – “Our vision goes beyond just selling tickets, as we aim to disrupt the entire live entertainment experience, including what happens before, during, and after the show.”

Amazon holds more than 1000 patents many of which are licensed by other companies.

Of course, it will be a surprise if Amazon is not taking advantage of the advertisement business model seeing the volume of users it generates. So Amazon Ad platform offers sponsored ads, display, and video advertising.

Not many people know about the scale of Amazon’s advertising platform though. In 2019, the majority of the ‘other’ revenue consisted of ad revenue which grew by 39% vs 2018 to $14 billion. As a comparison in 2019, Facebook income from Ad revenue is $69.65 billion and Google’s Ad revenue was $134.8 billion. That is such a decent return for a secondary revenue option. Furthermore, the revenue from advertisement grew to $31.1 billion in 2021.

Amazon’s ad platform is such a powerful one because people on the platform have a high-purchase intent. It is a common knowledge that the jump from ad to a landing page or promotional page, involves risks losing traffic and potential customers.

However, with Amazon, you are already on the place where you will buy.  Plus people know and trust Amazon. There is no clicking away to find another website, landing page or product. Ads are directly targeted to people already within the platform itself.

We have seen the various market segments and revenue streams of Amazon. Now, the next question is how does Amazon make money from these services? How do they charge the users of these various platforms? Well, there are multiple ways that Amazon make money deploying the business models within its model.

Below are the ways Amazon makes money:

Like we have noted before, Amazon is not just an aggregator, it also acts as a direct retailer. It works as an eCommerce platform and sells its own products directly to customers. A considerable percentage of Amazon’s revenue comes from the sales of these products. The company competes with other third-party sellers and brands to attract customers on the marketplace and promotes its own brand.

Now, apart from acting as a direct retailer, Amazon is also a marketplace for many merchants around the world.  And Amazon charges a listing fee from these merchants or third-party sellers to list their products on the platform. The fee starts at 2% of the product price and varies for various categories of products.

This is another big source of revenue for Amazon.

Amazon offers prime subscriptions to the customer for an enhanced shopping experience on the platform. The membership costs $119 per year and $12.99 per month.

There are several advantages associated with being a prime member:

Amazon offers various fulfilment options to merchants. They can either go for FBA, where Amazon stores, packs, and delivers the product to the customer, or they can go for easy shipment where the merchant stores and packs the product while Amazon delivers it.

Except for Amazon Prime Subscribers, FBA is not free. Amazon charges to have the goods delivered.

Amazon offers publishing services to independent authors as well as publishers. The company publishes the book, makes it available on the kindle store, and provides the author 70% royalty. This is yet another way that Amazon makes money.

How to Start Cucumber Farming Anywhere in Nigeria

Top 10 Companies in Luxembourg By Number of Employees

How to Remove Your BVN from Blaklisted List in Nigeria