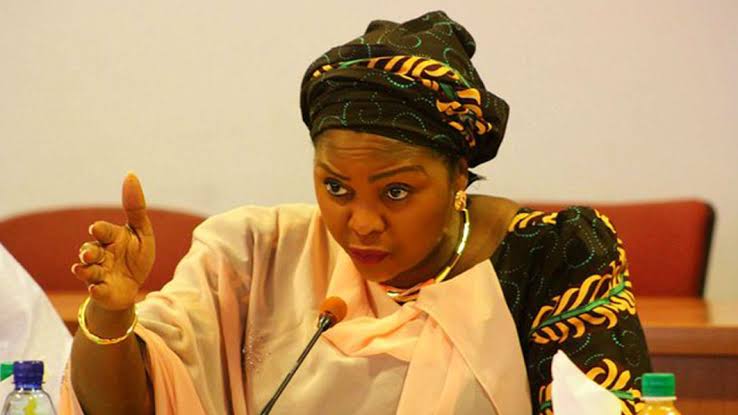 Barring any last minute change there seems to have been major twist of event in APC. The presidential aspirant of the All Progressive Congress (APC) Bola Ahmed Tinubu is looking elsewhere for Vice President.

As the party seek to deflect the talk of Muslim/Muslim ticket there are strong indications that the former Lagos state Governor is beaming his searchlight for a Christian that not many would have guessed. Reports have it that he is considering a Nothern woman to be his Vice.

And the information reaching us is that former Senator representing Adamawa Northern Senatorial Zone Senator Rev. Binta Masi Garba is tipped to share the ticket with Bola Ahmed Tinubu.

It is possible that the selection Rev. Binta may be as a result of her closeness to Tinubu’s wife Oluremi Tinubu. Senator Binta Masi Garba and Tinubu’s wife were colleagues at the Red Chamber for years.

Just 2 days ago one could want to believe that it is a 3-horse race. The choice was of APC Vice Presidential Candidate was most certainly to come from either of Senator Ishaku Elisha Abbo, SGG Boss Mustapha and former SGF Babachir David Lawan. But it does appear that Senator Binta Masi Garba is now leading the race.

Bola Tinubu Has Been an Advocate of Women Inclusion in Governance

Bola Ahmed Tinubu many people believe is an advocate of women inclusion in governance. And as such is looking to extend his advocacy to the federal level.

Apart from Alhaja Sinatu Ojikutu, who was deputy to former Lagos State Governor, Micheal Otedola, from 1992 to 1993, the state has enjoyed having female deputy governors through Tinubu’s support.

Senator Binta Masi Garba is not new in Nigerian politics as she setved two terms as House of Representative member in Kaduna State, Senator representing Adamawa Northern Senatorial Zone and the first woman chair person of the All Progressive Congress.

If Binta Garba is selected and APC go ahead to win, she will be the first female vice president in the history of Nigeria.