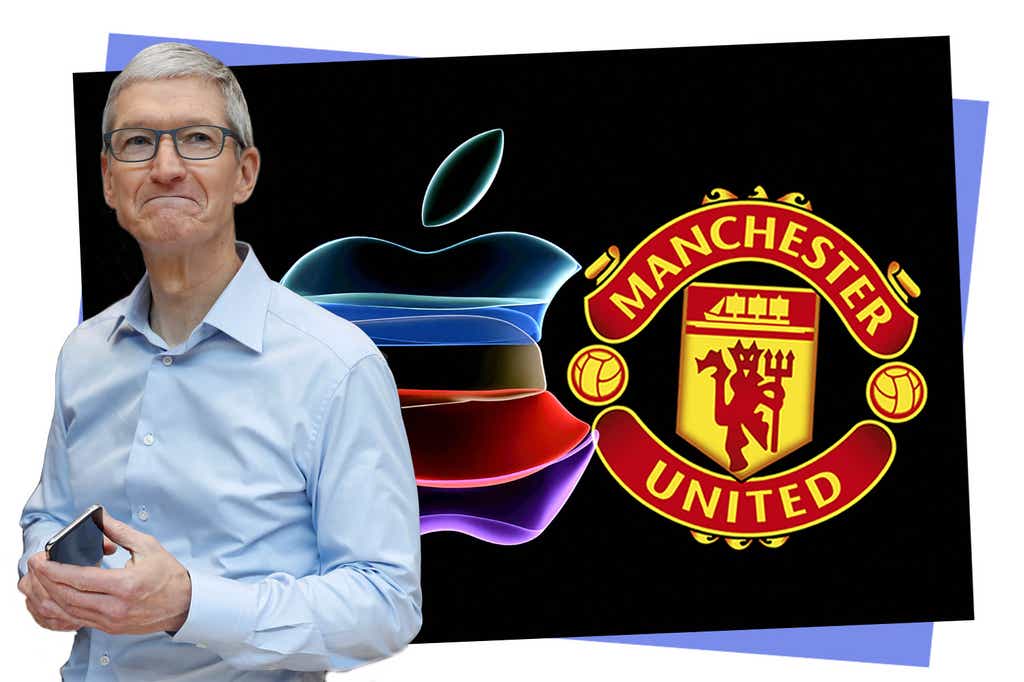 Daily Star has reported that Apple Inc. is weighing the option of buying Manchester United Football Club of England.This is coming just 2 days after United were put up for sale on by the Glazer family, current owners of the club.

The bid by Apple is one that ordinarily would sound like a dream to many football fans. But if it happens (and I use the word ‘if’) then it will shake not just the football world but also the tech world. The question is this possible? Could Apple be making any serious plans of buying Manchester United? If true, will the deal make sense?

Join me as we take a deep analysis of this together…

I once wrote a post highlighting how far apart football and tech can be in terms of valuation. Football may have the followers, but it is tech that has the money. In that post, I argued that Mark Zuckerberg through his company Facebook can afford to buy the top 10 football clubs in the world. And I mean it. The figures are there to confirm this.

So asking the question of whether Apple can afford buying Manchester United or not can only qualify as being naive. We know that Apple can comfortably afford that.

Though the Glazers are yet to mention numbers as to how much they are willing to sell the club but we should have an idea. Todd Boehly just bought Chelsea for £2.5 billion ($3.2 billion) few months ago. And from all we know, Manchester United Football Club is probably not worth 10x Chelsea. In fact, reports in some quarters has it that Apple is considering £5.8bn ($6.9bn).

So let’s even assume that’s the true valuation of the club, and so? How much is that to Apple? At the moment, Apple is the largest tech company in the world in terms of revenue (£326bn), while their net worth is said to be £2tn. So I guess we have the answer already, if anyone can afford the possibility of buying Manchester United, Apple can do so comfortably.

The real question should actually be whether Tim Cook and other top guns in Apple are really interested in buying Manchester United. Or maybe this could just be a mere and unfounded speculation. But those that know Tim Cook don’t know him as one that makes such expensive jokes or speculations.

So it is most likely that Apple is actually considering buying Manchester United for real.

It is true that Apple is a company known primarily for producing computers but it is also diversifying into other industries in recent years.

As the pandemic has shown, the world is changing and many companies are adjusting their business models to accommodate any unforeseen eventuality.  And Apple is one of such companies who is pivoting. It has pivoted its business to become less reliant on successful hardware launches. To achieve this, it has invested in building services such as Apple Music and TV+, which generated $78 billion (£64bn), around 20 per cent of Apple’s total revenue in 2022.

Apple has also inked a 10-year international deal to stream Major League Soccer (MLS) games from February 2023. And it already streams Major League Baseball (MLB) games. There’s equally a lot of talk of it agreeing deals to show NFL Sunday Ticket matches on TV+. All of these have cost sizeable sums — $2.5 billion (£2 billion) for MLS, for example.

Apple’s senior vice president of Services, Eddy Cue, is a MLS fan. He also has an intrinsic understanding of how offering people access to the media they love helps to build interest in, and loyalty to, the Apple brand. He led services and iTunes when Apple made the iPod such a dominant force. In 2019, he told Sports Illustrated about Apple’s interest in sports. At that time, Apple had a team monitoring live sports events as it worked out how to disrupt the market.

All these shows that Apple is gradually making its services a destination for sports and entertainment.

And you and I know that Apple has never been afraid of disrupting any industry. So buying Manchester United? Why not!

But does buying Manchester United make a good business sense for Apple? Is it a good investment? Is this something that shareholders will be excited about?

Well, for me, it makes absolute sense.

Despite all of her troubles (and indeed they have had many troubles since Alex Ferguson left) Manchester United remains one of the biggest football clubs in the world. In the ongoing world cup in Qatar only 3 clubs have more players’ representation than the red devil’s. It also remains one of the most followed football clubs in the world. Of course, no English club has recorded more success on the football pitch than Manchester United.

Here are some of the areas buying Manchester United Will Benefit Apple:

Though Apple has the highest mobile phone market share in the UK but Samsung still leads in Europe and globally. This is something Apple has not been comfortable with. And any move to change that will be given serious consideration. Buying Manchester United will definitely enhance that possibility for Apple. In fact, I spoke with Manchester United fans and they confirm they will immediately switch to iPhones if the deal pulls through.

2. It will increase their number of social media followers

Manchester United has the highest followers of all the football clubs in England. And only Real Madrid and Barcelona have more followers than it does anywhere in the world. As at the time the 2022 world cup began Man United has ManU has a total of 94.7 million followers across Twitter and Instagram (34 M & 60.7M respectively). On the other hand, Apple has 28.9M on Instagram and 8.7M on Twitter making for a combined 37.6 million. So obviously by buying Manchester United Apple can be sure of buying over a good number of Manchester United fans also.

Football has been a money spinning business in recent years. Particularly clubs competing in the English premier league has had to make incredible revenues from the TV rights. Currently the 20 premier league clubs shares an incredible amount of 1.5 billion pounds per season. And this is from TV rights alone. Then add that to match tickets, sales of club jerseys and other revenue sources. So this will definitely further increase the already gigantic Apple’s revenue.

What Does This Mean for Manchester United as a Club

Manchester will benefit on so many fronts and here are some:

In a recent interview by Cristiano Ronaldo just before he parted ways with the club he revealed that most of the facilities in the club’s training ground are still the same way they are when he left the club in 2009. In fact, in that interview he labelled the club training facilities a disgrace. And the club is not denying it. By all means Manchester United need to upgrade those facilities and Apple will not only be willing to do that but have the needed fund.

Actually one can argue that the problems in Manchester United is not just about more. The problem has more to do with visionary leadership than with money. Ed Woodward has obviously become disillusioned in recent years as the Executive Vice Chairman of the club. His signings and decision making has obviously been very poor, and the results shows in their trophy cabinet. Thankfully his tenure came to an end earlier this year. He has since been succeeded by Richard Arnold. But has there been any sign of improvement? Probably not one we have seen.

But that is a clear contrast to what we are witnessing in Apple Inc. The company has come this far with the visionary leadership of Tim Cook. And there is no doubt they can replicate that in Manchester United if they decide to buy.

3. The Club will become competitive again

Uncle Alex Ferguson the club won 13 premier league titles in 26 years. But 9 years after his departure they have won none. In fact, the biggest pain of genuine Manchester United fans will be that the club is no longer the number one club in the city of Manchester. The once ‘noisy neighbours’, Manchester City has become the envy of other clubs around the world.

But all that can change once the right management is put in place. Manchester United can win the Premier league and even champions league again if Apple takes over and hire a good manager, sign quality players and give them the support they need.

It might sound like a dream thinking of the possibility of Apple buying Manchester United. But there is absolute sense in it if it happens. It will be a mutually beneficial relationship that no one will like to bet against.

However, for now, there is no confirmation. But let’s just hold on, Manchester United is already up for sale and the next few days will review more details.

But don’t bet against Apple disrupting the entire football landscape if they do buy Manchester United.

Luxembourg Offers Free for All Public Transport – How Possible?