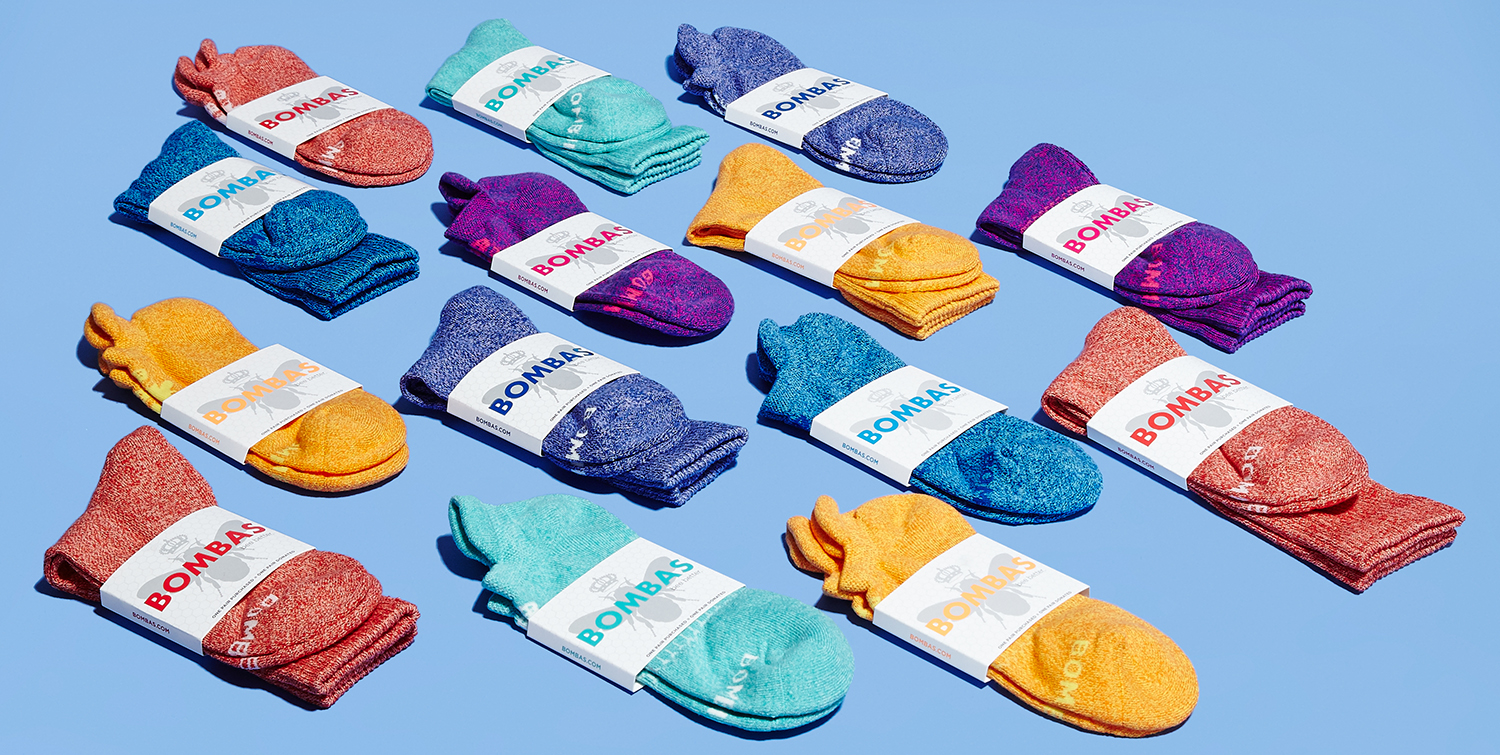 Bombas is an innovative socks company. Bombas founders developed a unique business model that gives out a pair of socks to the homeless for each pair sold. Today Randy Goldberg and David Heath co-founders of Bombas has built a business that exceeds 200 million dollars annual revenue. They have given out in excess of 20m socks to the homeless.

How did they achieve this?

IT ALL STARTS WITH A DESIRE TO SOLVE A PROBLEM

Sometimes great things happen by chance. According to David Heath the CEO and co-founder of Bombas he never grew up wanting to start a socks company. But David admitted that he has always had this desire to run his own company. In his words: ‘I walk around the world with my antenna up and my eyes open, just looking for problems to solve. And of course, you always find things in the most unlikely scenarios,’ he noted.

So  how did they stumble on the Bombas Idea?

David and Randy were both working at a media start-up when they learned a surprising fact on Facebook. According to them David was scrolling on Facebook in 2011 when he came across a post that identified socks as the most requested clothing item in homeless shelters. He said this is something he never spent more than a few seconds thinking about. But imagine that is a luxury for more than 600,000 people in US alone. He equally imagined how many millions of people will be in that shoe globally.

This discovery didn’t immediately translate to a business, but he couldn’t shake off the thought either. He later learned how  much companies like TOM and Warby Parker were donating in shoes and eyeglasses respectively to some charities. It was this latest discovery that finally triggered the business concept in him.

David shared this discovery with Randy. And they thought, “Why not build a company to solve this problem?” The business could give away a pair of socks for every pair it sold.They discussed about this for a while and factored in a few things. They knew that to donate more socks they needed to sell more also. And to sell more they have to create the best socks in the history of feet.

So basically, the company started out first with a desire to make the society better and not to make money. That mission was reflected right from the name they choosed.

WHY THE NAME BOMBAS?

David was asked how they arrived at the name Bombas and what it meant here is his answer.  “Bombas is derived from the Latin word for bumblebee”.  “Bees are altruistic animals,” he notes. “They work together as a hive to make their world a better place.” He noted that he, co-founder Randy Goldberg, and employees also donate something just as valuable – their precious time. Each employee is given 10 pairs of socks on their first day and encouraged to pass them out. Likewise, in the days before the pandemic, the company offered 10-15 different volunteer opportunities each month. This is really a company with a mission.

In 2014, they both appeared on “Shark Tank” to pitch their idea to investors to raise some funds.

At that time in 2014, the guys were only making about $450,000 in sales revenue in 9 months. They were seeking $200,000 in exchange for a mere 5% stake in Bombas.  They indicated to the Sharks that the industry of selling athletic socks had been approached in the same way for many years.

Randy explained to the panel how two years of exhaustive research and design resulted in seven significant changes that culminated in “the most comfortable pair of socks you’ll ever wear.” David discussed their business’s charity element, noting that they donate one to those in need for every pair of socks sold.

Sample socks were given out, and they discussed how they had modified the style, including using Pima cotton, improving stitching, removing forearm seams, and adding a revolutionary arch stitch. David stated that their predicted sales statistics for the first year were $1.1 million, $2.7 million for the second year, and upwards of $4.9 million for their third year. In addition to shipping and donation charges, their profit margin averaged 54%.

WHO WERE THEY PITCHING TO?

In the room to listen to David and Randy were 5 investors and billionaires. They are:

When they were done with their pitch the panel was impressed by both the work put into establishing a high-quality product and the charitable component of the business. But they weren’t just going to invest in it on a face value. So it was time to drill the young entrepreneurs with questions. Some concerns were raised in the course of the questioning.

Robert, a seasoned runner, was curious about what set Bombas apart from the plethora of competitors on the market today. For him it wasn’t quite clear. And this was despite all the explanations tendered by David and Randy. And that was how Robert withdrew.

David and Randy had valued Bombas $4m when they appeared at Shark Tank. But for Kevin that was “ludicrous” in the absence of market exposure. And because of this he had to withdraw.

Lori also took issue with the policy of outsourcing client acquisition, believing that they should seek out and sign new clients. She too left, at this point only Mark and Daymond were left.

Mark was concerned that Bombas had plateaued too soon and believed that the markup should be higher; he also believed that this would jeopardize the company’s capacity to grow profits over time and thus dropped out.

WERE THE GOING TO RECEIVE THE FINAL HAMMER OF NO?

Obviously these investors didn’t think Bombas was a good ideas. They didn’t believe it was a viable venture. So right before David and Randy’s very eyes their pitch had crumbled. One by one the investors had pulled out. At this point they had just Daymond and they got to convince him by all means.

Daymond was the Shark with experience in the fashion sector. David and randy quickly increased their offer to 10% for the $200,000 they seek. This offer was offered just to Daymond partly because of his experience in the fashion sector and partly because he had them that he was on the verge of leaving the Sharks with the rest. But guess what? He instead insisted on getting 20% of the business for $200,000.

At this point David and Randy knew they were in trouble. They needed to make a decision and that very fast. If they lose Daymond it might be disastrous. Did they overvalue the company in the first place? They wondered.

The guys were almost resigning to fate, they knew they go get another ‘NO’ as an answer. Then there was a twist in the whole discussion. Daymond consultant further with his financial adviser. And By the time he returned to the room he came with good news. After a few more deliberation both party agreed to 17.5% equity in exchange for $200,000. That was how they welcomed John Daymond to join the Bombas Team as a major investor.

THE PAY-OFF FOR DAYMOND

There were five investors in the room as the guys pitched their idea. Four of them felt Bombas was a bad idea or at best not worth their money. But Tandy and David didn’t give up.

Rejections will come, but keep pushing

Now, think about this for a moment. As an entrepreneur, if you want to build anything of worthwhile, you are likely to receive so many rejections. Yea, many people may not believe in your vision. Many might not see what you are seeing. But let me tell you something. The number of rejections you get may not always count than that one YES that will eventually come if continue pushing.

It doesn’t matter how many rejections you get, a single YES can completely alter everything about your business. Don’t stop before that yes comes. View those rejections as the ,gates of hell’ seeking to stop you from manifesting. The good news is that if you keep pushing those gates of hell will give way and allow the king of glory to come in.

Even Professionals can be wrong – don’t take it personally

Sometimes even the so-called professionals might be wrong when they cross-examine your idea. It is your duty not just to believe them or accept their evaluation hook-line and sinker. Experts can be mistaken, consultants can be wrong, investors can be wrong also. Even people with genuine intentions to help can be sincerely wrong. So when they say “no”, don’t take it personally and don’t feel offended. It is important to involve people in validating your ideas but don’t take their opinion as final.

Believe in yourself and Your Idea – even if Others don’t

Understand your mission AND your product before asking for money

To communicate your product’s impact and quality as powerfully as possible, you’ll need to do some research. It took the Bombas co-founders two years of learning about socks and homelessness to verify their business idea was worth launching. They knew exactly what they were building before asking for money.