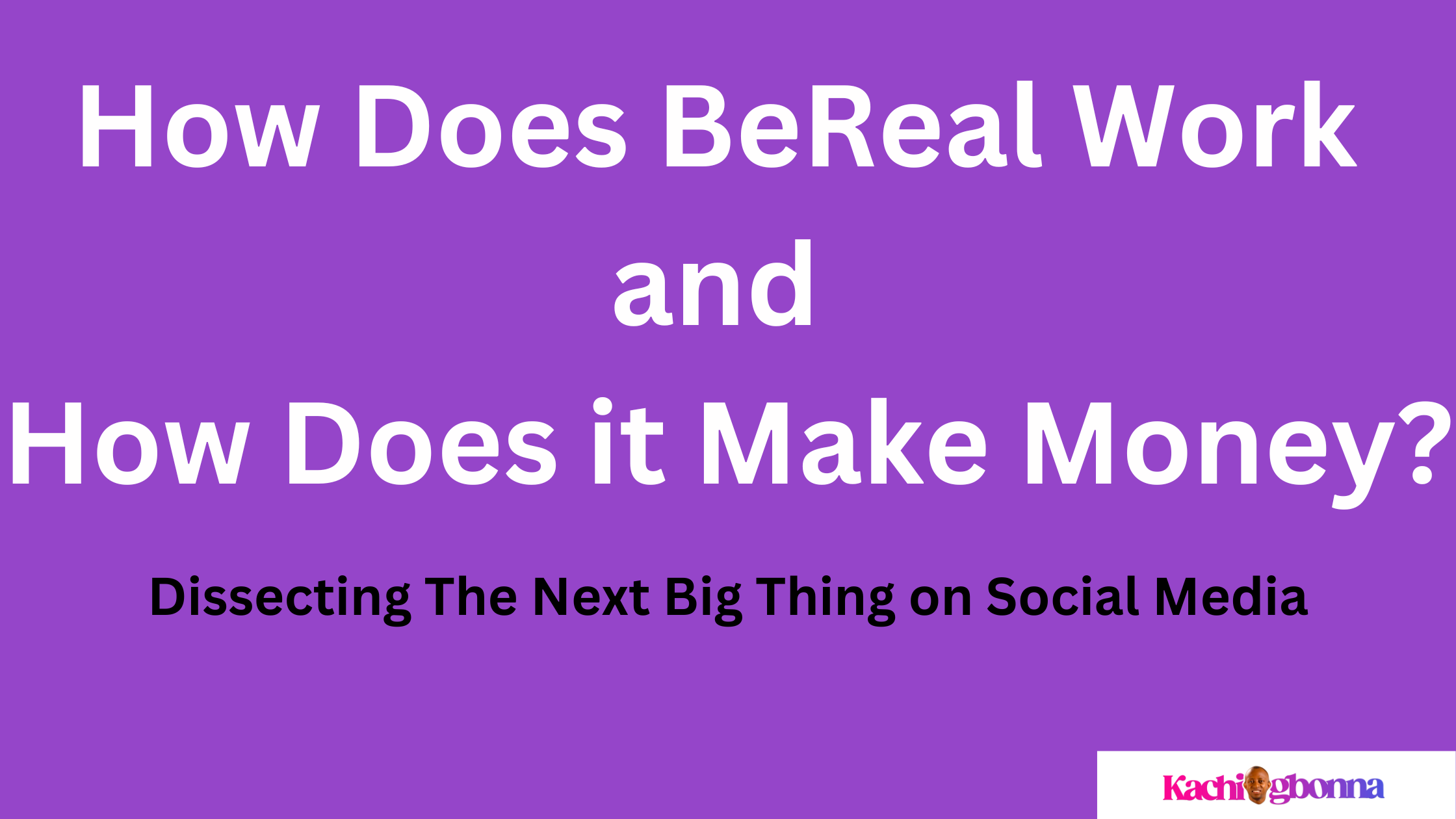 How does BeReal work? – Dissecting the next big thing on social media

Many people has described it as the “anti-Instagram” app. Others believe that after TikTok, Beral has become the greatest disruptor of the three social media giants (Facebook, Twitter and Instagram). The photo sharing app shares many of the same qualities as Instagram but places an emphasis on users to live in the moment – hence the term BeReal.

Founded in 2020, but all of a sudden almost everyone is talking about BeReal.

In today’s blog post we are going to take a look at what BeReal is, how BeReal works, how it makes money and why it is becoming everyone’s favourite social media app.

BeReal is a social media app that allows users share one photo a day with friends and that in real time. In a world where everyone seems to be showing only their good sides on social media and pilling up pressure on others with lots of over-edited and glamorous looking pictures BeReal might just bring back a little bit of authenticity to social media posts and lives. Photos on BeReal come with no filters. Followers nor any form of preparation is not allowed on the app. It’s all about in the moment photos and being ‘real’, hence the name ‘BeReal’.

BeReal users receive a daily notification at a random time of the day that says “⚠️Time to BeReal⚠️”. As soon as you get the notification, you have two minutes to take a selfie of what you are doing at that very moment. Wow, what can be more fun than that? If you choose to wait to post a picture later in the day when you look better or are doing something fun, it becomes obvious to friends that you are faking it.

How Does BeReal Work?

So you want to know how does BeReal work exactly and why people are crazy about it?

The way BeReal works is that it prompts users by sending a notification to take one unedited photo a day at a random time. The most interesting thing about “Time to be real” is that it changes every single day. So you can’t seem to plan around it. Time to be real can be:

In fact, no algorithm is so far able to decode a formula for calculating when the next time to be real will go off. But one thin is sure, no day will pass without a time to be real moment.

Remember you have a maximum of 120 seconds to take and share a picture of you at the moment.

The app uses both the front and back camera of the phone to create a collage and show followers exactly what is happening in that moment.

Once the 120 seconds is over the app will mark ‘late’. And all photos uploaded will be shown in sequential order. Every one within the group has a chance of seeing them and reacting by commenting or posting an emoji.

What is The Purpose of BeReal?

Still on the topic of how does BeReal work, you might want to ask “What exactly is the purpose of this app?”

What is the difference between it and other social media platforms?

Well, I think the main purpose or idea behind BeReal is to promote authenticity and reduce the propensity to fake life.

Because you are required to take photos in real time, the photos you post cannot be retouched, edited or fabricated to show an idealized, unrealistic portrayal of a person. If done correctly, the images are an authentic representation of a person’s day-to-day life. Though the app allows one to retake a photo within the 2 minutes window, but guess what? It will show your friends exactly how many times the picture was taken.

I also believe that BeReal app will help all of us to actually live our best life.

Since no one wants to be captured doing what is wrong so you tend to be only at the place you want to be seen or doing things you wish to be identifies with at all times since you can’t tell when ‘time to be real’ moment will come.

Does Everyone Get BeReal at the Same Time?

Whereas Facebook, TikTok, Instagram, Twitter and most other social media platforms allows people to share the best of themselves, BeReal allow allows them share their real self. So whether you are watching Netflix on your HD screen or you are at the beach (we all love to share such moments) or you are having a bad day at the office or you are even lost in thought, once it is the BeReal moment you are notified and encouraged to share.

And the BeReal moment occurs goes off at exactly the same time of the day. Whereas time zones may differ, but everyone still have to get it at the exact same moment (whatever time that may be by the respective time zones).

For example, the Bereal moment can go off for:

People in Chicago by 6AM on Tuesday

Those in Australia at 11PM on Tuesday

BeReal users in China at 8PM on Tuesday

And 1PM on Tuesday for those in Paris

What Happens if You Miss a BeReal Moment?

I imagine you will be asking right now if there are consequences of missing a BeReal day or moment seeing how the app works.

Well, there are no real consequences. There are no BeReal police to arrest anyone who fails to post within the two minute window. You won’t even pay any form of fine – except of course you decide to do a BeReal challenge with friends. In fact, you won’t even as much as lose your data for not ‘being real’ for that particular day.

So what happens when you miss the BeReal moment are basically two:

If you post even a second after the 120 seconds window, your friends will know and maybe have some jokes around it.

And if you fail to post at all, then you will not see the pictures shared by others for that particular day.

So if you love to see what your friends are doing you must be ready to share what you are doing as well.

That is the good thing about it – it doesn’t stress you at all. No need of thinking about what to post. Just be real, just be yourself.

On BeReal, you can only post your in the moment photos. You post photos with the two-box, front and back camera format when you are prompted. There is no provision for selecting any picture from your gallery to share.  Of course that will immediately take away the uniqueness and the “in the moment” aspect of the app.

Wondering how many times you can post in BeReal on a daily basis?

Just once a day.

Whereas you are at liberty to skip any day you are not ready for the BeReal moment but you can’t make up for it by posting twice the next day.

How Does BeReal Make Money?

So far the only money BeReal has made is from investment. Of course this is just the default business model for most social media apps and even other startups. The goal for now is to gather as many users as possible and as quickly as possible before any talk of how to monetize the platform.

This means you won’t need to pay any subscription fee to use the service. There are equally no form of ads on the app at the moment.

Of course as the user base grows BeReal owners will definitely want to monetize it so investors can get back their money.

As at the last check, the app has raised $90 million in two rounds of investment bringing the total valuation to $578 million. Leading in the investment to BeReal is Andreessen Horowitz who is also a lead investor in Airbnb, SpaceX, Stripe, Clubhouse etc.

Basically there are only two ways of reacting in BeReal; comment and use of emojis.

Can One Gain Followers on BeReal?

This app is really bringing back memories of the way life used to be before social media led many people to the life of trying to become what they are not in order to impress and gain followers.

On BeReal, you cannot gain followers. Rather you simply have friends. And only these select groups of people (friends) can see your posts, though occasionally you can choose to share with the public. . This takes away the pressure of wanting to put up a perfect public image and it equally brings back the fun of sharing content only with your friends.

How Does BeReal Work – Key Stats

Here are some important stats you might want to know about BeReal and how it works:

Is BeReal Available in Nigeria?

As at January 2023, BeReal is not yet available in Nigeria. However, considering how big the market is and social media adoption rate, it won’t be a surprise to see BeReal in Nigeria anytime soon.

How Does BeReal Work – Wrapping it Up

Have you ever imagined how the life of your favourite celebrities will be outside the shinny space of Instagram? I mean imagine bumping into 50 Cent by accident or getting to see how Beyoncé dresses or looks without makeups. Then invite them to BeReal. BeReal is all about being authentic. It is all about being the real you. It is all about living in the moment.

BeReal brings authenticity to social media life and reduces the pressure of trying to fake what one is not.

Such is the popularity and growth of BeReal that both Instagram and TikTok are mimicking the feature already.

How Does BeReal Work – Your Opinion Matters

I will like to hear from you. What do you think about this new social media app. Do you think the uniqueness and authenticity they bring makes sense. How do you rate it when compared to other social media apps like Facebook, Instagram, OnlyFans, Twitch, TikTok etc?