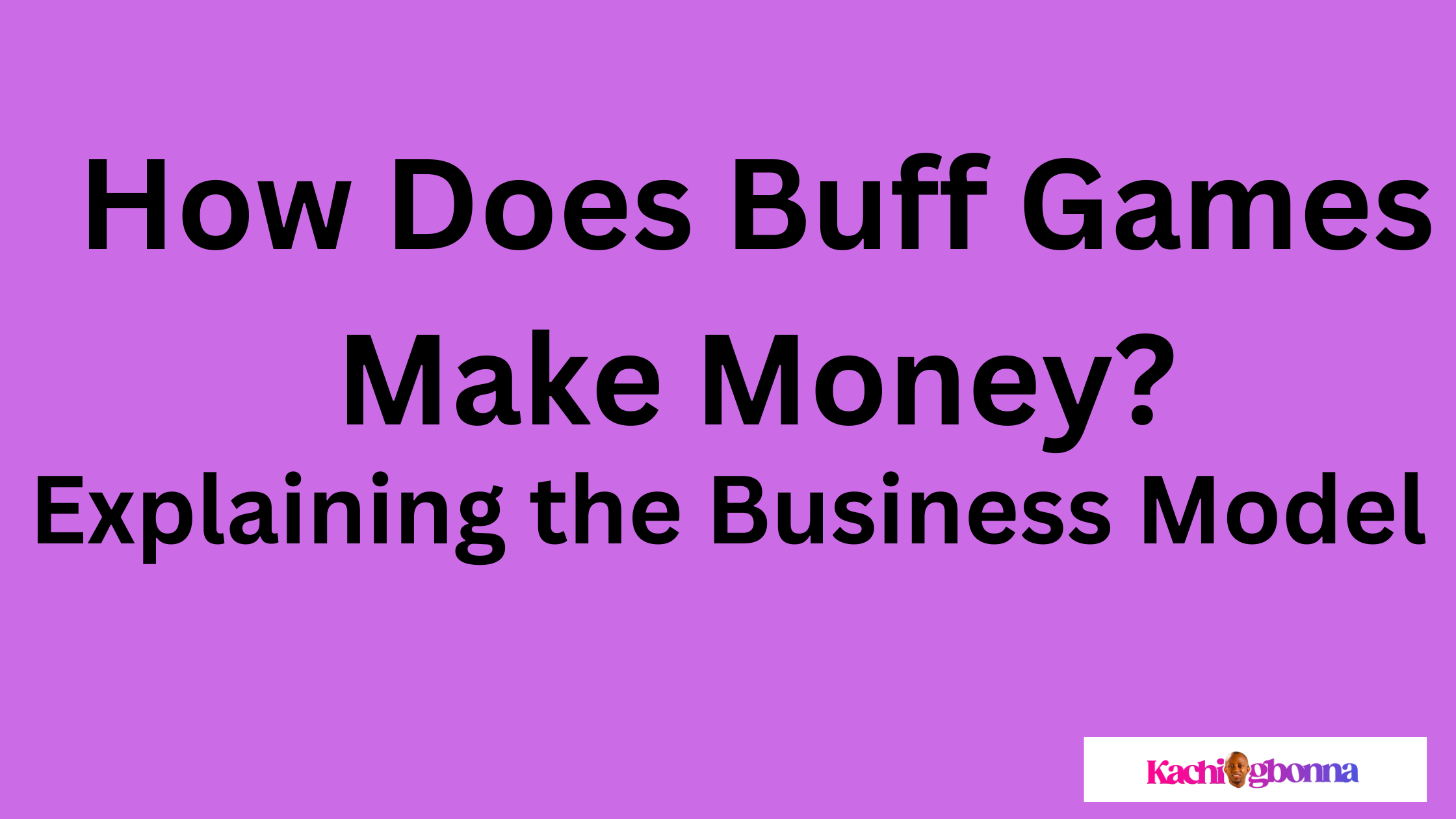 How Does Buff Make Money in 2023? -The Business Model

Buff is a software application that enables users to earn redeemable rewards while playing video games on their PC or mobile phone.

The platform works together with some of the world’s leading game developers including Epic Games, Electronic Arts, and others.

This way gamers can earn rewards while they play their favourite titles. So imagine playing as League of Legends, CS:GO, PUBG, Fortnite, and at the end earning redeemable rewards including cash and cryptos.

How Does Buff Game Work?

The truth is that there are a lot of ways to make money playing video games. And we have seen many companies operating like Buff who has come and gone. Maybe people are always skeptical of the of getting free money just for gaming. Of course it sounds too good to be true.

For this reason we want to take a look at how Buff actually works and if it’s worth using to earn rewards.

Here’s how earning rewards with Buff Games works. First, you either download the platform’s Windows software or mobile app, which is available for both Android and iOS devices.

Afterward, you simply start playing one of Buff’s partner games to start earning rewards. These rewards are dubbed ‘Buff Coins’ and are granted for completing in-game achievements.

Those coins can then be cashed out for a variety of rewards. Primarily, users can redeem them in exchange for rewards such as gift cards, gaming hardware, in-game skins, and more.

So below is how earning a reward with Buff Games work:

The first step in using Buff is to download the Buff app for Windows or the mobile app for Android or iOS.

After downloading the app, the next thing to do is to create an account. You can either register an account using your email or connect your Discord account to the platform.

Once you have created and connected your account then you are good to go.

Buff runs in the background while you play games. In return, you earn Buff coins for playing.

How many Buff coins you earn depends on your performance. For example, if you have a better KD ratio, you earn more coins. Buff also pays you more coins if you win or lose matches.

Maybe you are asking or wondering how you can claim or cash out the coins you earn while playing Buff game.

What happens is that the money is deposited inside your account. And that forms the currency you use to buy rewards. Most of the reward options are electronic gift cards or in-game rewards. And you can cash out by using Buff’s Marketplace.

How Does Buff Make Money?

Now that you know how Buff Game works, I think the next sensible thing to ask is “How does Buff make money?” Yes, from where do they get the money they pay gamers? This will lead of to understanding the Buff business model and that is basically the advertising model.

But apart from from advertising, Buff also makes money by offering a premium subscription, as well as from interchange fees. So in answering the question how does Buff make money or what is Buff revenue model we can say it uses a combination of advertising and freemium model.

These are however, a slight deviation from the business model the founders had in mind when Buff started back in March 2018. Back then, initial coin offerings (ICOs) were allowing startups without products to raise tens of millions in funding.

The team planned to create a blockchain-based loyalty program for gamers. Users would be rewarded in the platform’s native currency (Buff Coins) when the blockchain would launch.

In order to get the business off the ground, they partnered with Overwolf, a gaming software provider that ran over 300 apps and boasted 15 million users at the time. The partnership gave Buff access to data from the hundreds of games that Overwolf had already been integrated in.

Over the coming month, the team stayed busy building up hype for the platform. This is a common tactic within ICOs as it helps to maximize the money that a startup can raise.

Let’s explore further each of the Buff revenue streams below.

1. How Does Buff Make Money? – Through Advertising

For any startup or platform that decides to adopt the freemium business model, the initial revenue usually come from advertising. And that is the case with Buff.  Ads are displayed both within its Windows as well as mobile app.

Those ads are shown either in a banner or video format. So the company is compensated for every ad impression. This means that anytime a user on the platform sees any of the ads the company receives a small fee.

And, if a user clicks on one of those ads (or even ends up making a purchase of any of the advertised product or service), Buff receives an even greater fee from the advertiser.

This has remained one of the most consistent revenue sources of Buff.

2. How Does Buff Make Money – Through Subscriptions

Another way Buff makes money is through the subscription fees it derives from its various premium plans.

Of course, offering subscriptions is a common monetization method for platforms that operate under a freemium model. That means users can enjoy the basic and core services for free. However, if a user seeks to have even a better and smoother experience and equally access to more features the person will have to subscribe.

Buff has three different plans; Premium, Premium Plus, and Premium Elite. And each of them are available on both a monthly and yearly basis.

The cost are as follows:

The benefits of the premium plans include extra benefits such as:

3. How Does Buff Make Money – Through Interchange Fees

The card itself has been issued by Visa and Evolve Bank & Trust. The cooperation with Evolve in particular ensures that Buff is able to offer the necessary security to keep a user’s funds secure.

The interchange fees charged when those cards are used therefore became another source of revenue for Buff.

How Much Can One Earn From Buff?

Well, the amount is not fixed. It depends on a few factors and top among them is your performance on the game. And sometimes how long you spent playing.  But for the real game lovers, they can earn around $5 to $15 worth of Buff coins every month.

What Buff pays is neither dollar nor pounds nor any of the regular currencies. But the reward is still valuable all the same. So how do one cash it out or convert it to ‘real’ money?

There are several reward options available with which you can redeem your coins for. Some of them are:

The gift card variety is pretty decent and includes options like Amazon, Domino’s, XBox, and Steam.

In terms of the real value of Buff coins, it costs approximately 600 Buff coins for most $5 gift cards. Most other rewards like Steam codes or in-game rewards are around 900 to 1,500 Buff coins.

Is Buff Available in Nigeria?

No. Buff is not available in Nigeria yet. Buff Games must however not be confused with Buff – the Spanish apparel company known for sale of neck and head wears. Of course this Buff has its stores and products in Nigeria cities of Abuja, Lagos, Port Harcourt and Benin City.

Wrapping it Up on How Does Buff Make Money

Buff game is a software application that enables people earn redeemable rewards while playing games either on their PCs or on their mobile devices.

However, Buff does have a way of making money to cover the rewards and keep the business running. Three major ways Buff does make money are through advertisement, subscription and interchange fees.

And there are also different ways of redeeming or cashing out the Buff coins with the most popular of them being through gift cards.

How Does Buff Make Money? – Your Opinion Matters

Did I miss out on anything?

Do you know more ways through which Buff does make money?

What have been your experience with Buff?

Are you able to redeem your Buff coins?

Share with me and I will be glad to reply – the comment section is open for you.

How does Buff make money?