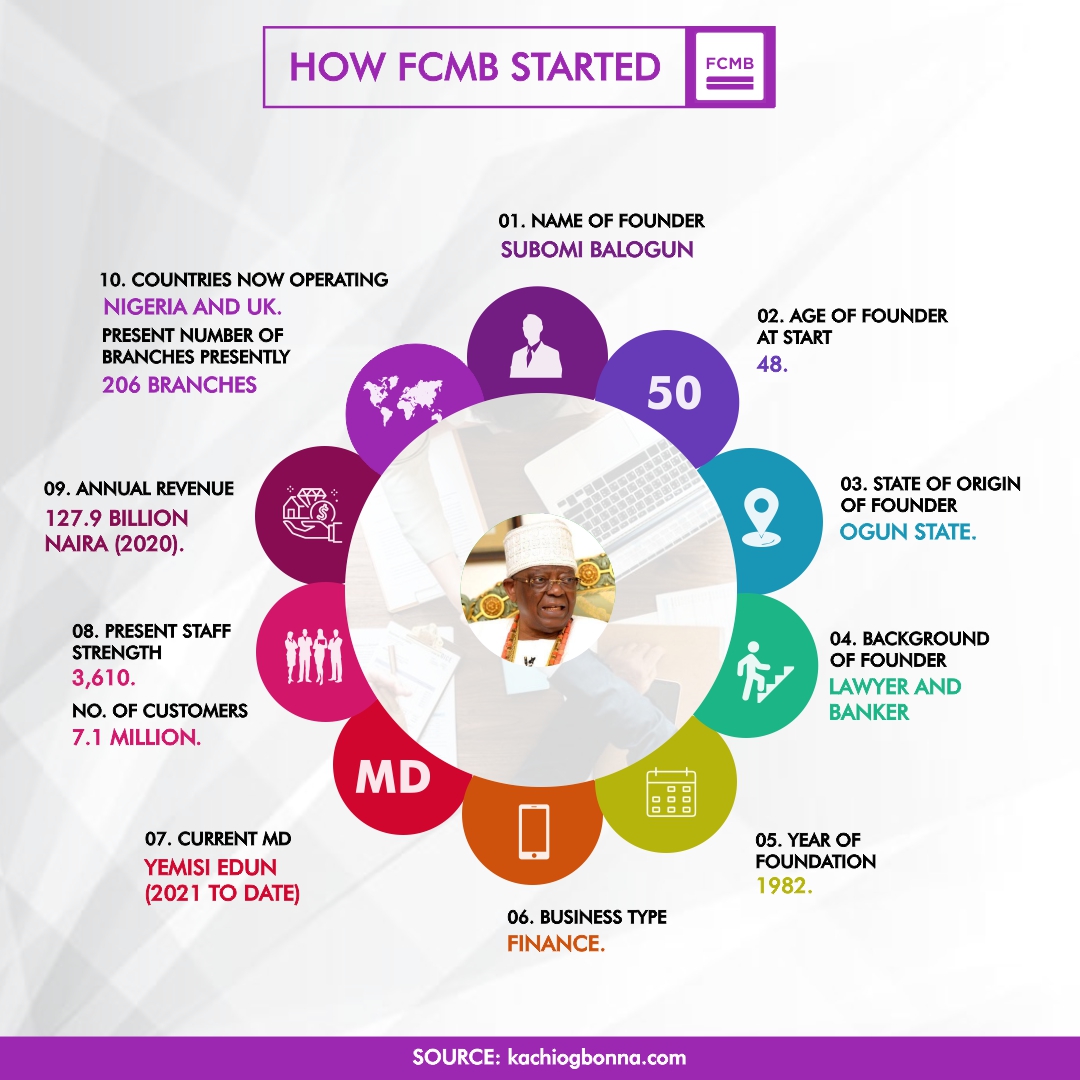 One of the 23 commercial banks in Nigeria today is First City Monument Bank. In fact it is not just among the 23 strong commercial banks but also competing for a position as one of the top 10 best banks in Nigeria. The bank today has 9 subsidiaries and 3 business groups. But looking at the size of FCMB today one may not understand fully how the bank started. Nor what led Otunba Subomi Balogun to start the bank. In today’s blog post I will share with you in details how and why FCMB started.

How FCMB Started – The Story of a Courage & Tenacity

In a chat with a group of journalists as part of activities to mark his 83rd birthday in 2013 Subomi Balogun shares the story of how FCMB started and his reason for starting it. Here him speak…

“I had a dream and a vision. I was cheated as an employee in another institution created by Nigerians and Americans. Besides my expertise on the job I would say I was the brain behind the whole thing. Then I went on a course in the US and came back with a fresh idea. I came back with an idea that we should set up a merchant bank. Fortunately, the management accepted it.

So we went ahead and set up the merchant bank. The whole of the company was aware that I was the brain behind it. But when it came to selecting the Chief Executive, I was told that in spite of all entreaties, that I could not be the Chief Executive. Their reason was that I had a basic training in law and not banking. I was 42 then. And they brought a young man with little or no experience, from America to head the company. The guy was 32 and he was brought to come and replace me”.

Who is the founder of FCMB?

Which state is Subomi Balogun from?

Subomi Balogun, the founder of FCMB is from Ogun State

Who is the current MD of FCMB?

When was FCMB founder?

How old was the founder of FCMB when the bank was founded?

Subomi Balogun was 48 years old in 1982 when the bank was founded.

How many branches does FCMB have in Nigeria?

What is the former name of First City Monument Bank?

When did FCMB acquire FinBank?

How FCMB Started -Out to Prove a Point

Subomi continues, “I felt that was not the right thing to do. And though I was not interested in the money, but I wanted to prove a point. I wanted to prove that if given the opportunity and with the support of the almighty God I had the meteor to attain the commanding heights in the management of a financial institution. Though I had nothing in my pocket at the time, but I had courage. I also knew I had God. And that was how I started on the journey of self actualization.

So that was how Subomi moved on from the company where he worked. He managed to convince a group of friends to buy into his idea for a merchant Bank.  They started first with a stock-broking firm called City Securities Limited in 1977.

And by 1982 they got a full banking license. They called the bank First City Merchant Bank. By getting a banking license in 1982 FCMB became the first local bank in Nigeria to be established without government support. As at that time the banking industry was dominated by foreign brands plus a few government owned banks. In fact it was after First City Merchant Bank that other Nigerians realized that private establishments can apply for a banking license also. So in other words it was Subomi that showed others the way as we have it today.

Other stories of How They Started:

HOW SWEET SENSATION STARTED FROM A GATEMAN’S HOUSE

In 2001, there was a name change from First City Merchant Bank to First City Monument Bank (FCMB). This was following the bank’s transformation into a universal bank. In 2004, a private placement of shares raised over N7bn, followed by a conversion into a public liability company and the company’s listing on the Nigerian Stock Exchange (NSE) in the same year. Through an initial public offering in 2005, FCMB raised over N16bn towards the then N25bn share capital target stipulated by the Central Bank of Nigeria (CBN).

With that FCMB became one of only 25 banks that were able to achieve this target from over 80 banks in existence then. Also, in 2005, FCMB acquired Co-operative Development Bank, Midas Bank and Nigerian American Bank (former Nigerian subsidiary of Bank of Boston). Before the consolidation in 2005 the bank had 26 branches. But there was a rapid growth after that, and by 2007 the branch network had increased to 150 branches.

The year 2007 also saw another public offering which increased shareholder funds from N31bn to N133bn.

The Acquisition of FinBank

In 2011 the Central Bank of Nigeria (CBN) came up with another round of reform. This time around it has to do with the recapitalization of all the commercial banks in Nigeria. Unfortunately about 9 banks were unable to meet up with the recapitalization requirements. One of the banks that couldn’t survive that recapitalization exercise is the then FinBank. But FCMB moved swiftly to rescue FinBank. In a shareholders meeting of September 29, 2011 99.97% of the shareholders voted in support of the acquisition. FCMB therefore through its wholly owned investment subsidiary FCMB Investments Limited, went ahead to acquire FinBank.

The acquisition exercise was completed in February 2012 and both banks merged in October 2012. Part of the agreement for the acquisition was for shareholders of FinBank to accept 1 FCMB share for every 60 shares they had in FinBank.

In June 2013, FCMB Group Plc  was formed. It is a non-operating financial holding company also regulated by the Central Bank of Nigeria (“CBN”). This was in response to the CBN’s regulation on the scope of banking activities and ancillary matters. The group restructuring which followed, resulted in FCMB Group Plc becoming the holding company for FCMB Plc and its subsidiaries.

FYI: Bank recapitalization is the process of injecting more long-term capital  into the bank to the level at least required by the monetary authorities in order to ensure the security of shareholders fund.

In its 4 decades of operation FCMB may not be the biggest bank in Nigeria, but has certainly grown. Today FCMB Group Plc is a bank-led financial services group and has 9 subsidiaries. And the 9 subsidiaries further fall into 3 business groups:

Where They are Today

First City Monument Bank Limited, the flagship company, has approximately 7.1 million customers and 206 branches in Nigeria. It also has a banking subsidiary in the United Kingdom through FCMB Bank (UK) Limited. And it is authorised by the Prudential Regulation Authority (PRA). And also regulated by the Financial Conduct Authority (FCA) and the PRA in the United Kingdom).

Today the company makes an annual revenue in excess of 200 billion naira. And its shareholders exceeds half a million. Overall FCMB ranks as the 10th best bank in Nigeria with the following impressive stats:

Conclusion on How FCMB Started and Lessons

Otumba Subomi Balogun must be a very happy man whereever he is watching how far FCMB has come.