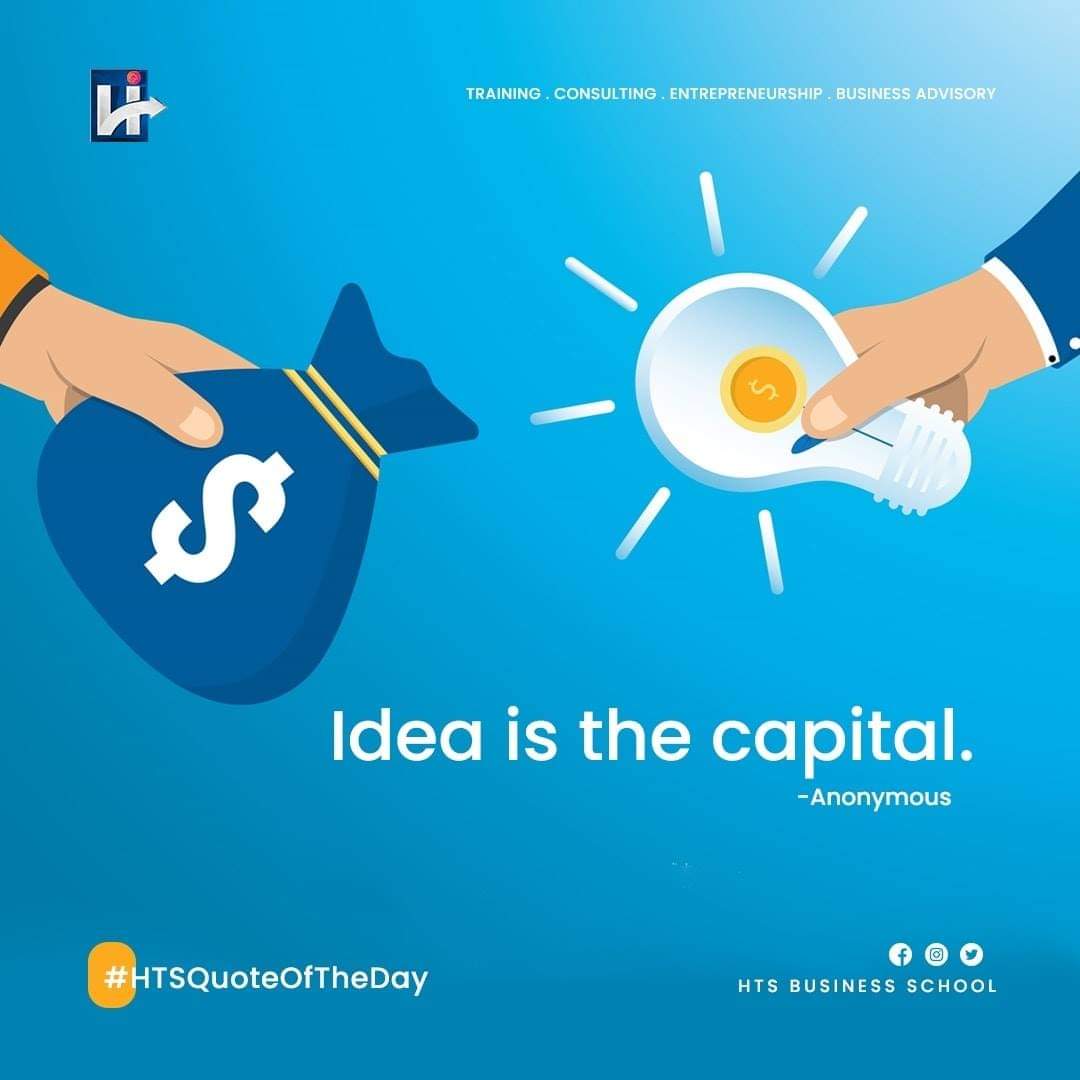 Idea is the Capital, everything else is money – but how many entrepreneurs understand that?

How many people believe that they are being held back by money even in the midst of very creative ideas?

As an Economics Student in high school I was thought a topic called Factors of Production. And according to that topic or at least the examination curriculum, there are 4 factors of production. They are, land, labour, capital and entrepreneurship.

Before I go ahead to discuss our subject of interest today which is ‘Idea is the capital’, let me recap what I learnt from my Economics knowledge about the topic.

Explaining the Factors of Production

Factors of production are said to be the complete economic resources that if well utilized will bring about the output of goods or services. And according to my high school Economics knowledge the following are the definitions of the four factors of production.

1. Land – as a Factor of Production

As a factor of production, land refers to naturally occurring goods like soil, water, air, minerals and climate that can be deployed in the creation of goods and services.

While land is an essential component of most ventures, its real importance in the production process actually varies based on the industry. For example, for an IT firm, land is not such as asset. In fact, it can easily begin operations with little or no investment in land and go ahead to bring about very powerful products or services. But the same cannot be said of an agribusiness or a real estate company. For these industries, land is the most significant investment.

Meanwhile the reward given to a landowner is primarily known as ‘rent’.

2. Labour – as a Factor of Production

For example, in the aviation sector, the engineers or construction workers at an airport site is part of labor. But so also is the Pilot that gets to fly people to their various destinations, and even the air hostesses. The ticketing staff are also a part of labour.

Also, the reward for labour is often referred to as ‘wages’.

Incidentally, there are disparities in the wages paid to various labourers based on either their skill level or their training.

3. Capital – as a Factor of Production

In our discussion of the topic ‘idea is the capital‘ this section is very important and you will need to pay attention. High school Economics had defined ‘Capital’ to mean money.

To further complicate things for us, modern mainstream (neoclassical) economists believe that capital (money) is the primary driver of value.

But is money truly a factor of production?

The answer is a capital NO. And the reason is simple – money is not directly involved in the production process.

So there is a rather broader definition that sees capital as not just money, but as human-made goods which are used in the production of other goods. Examples here include machinery, tools, and buildings.

Capital in this sense are of two types; fixed and working capital. Fixed are one time investments like machines, tools while working capital consists of liquid cash or money in hand and raw material.

But as we proceed in this blog post we get to understand the real definition of capital – idea is the capital.

Meanwhile the reward for capital is said to be interest.

4. Entrepreneurship – as a Factor of Production

And that process of coming up with innovations is actually what we call ‘idea’. And that is why it is strange to me that there is no mention of the word ‘idea’ in the original study of factors of production. Not as a factor on its own and not as a proper definition of the factor ‘capital’.

Idea is the Capital

I just shared with you what I learnt in the classroom about factors of production. But as I grew up and became an entrepreneur myself, I realized that practically speaking those factors of production are not correct. Something big was missing. Or at least, there could have been a better definition for capital – idea is the capital.

From my experience as an entrepreneur, I discovered without guess that idea is the capital and every other thing is just but money.

Everything about the production of a product or service for the benefit of mankind starts with an idea. Yes, you must understand that, and that is why I want you to know that idea is the capital – yeah, the real capital.

But you may ask, if I say that idea is the capital, what then is an idea?

So let me explain.

What is an Idea?

According to Collins Dictionary, an idea is something one thinks, knows, or imagines. It is a thought, a mental conception or image or notion about something.

The word idea is so often applied in the world of business as ‘business idea’. So we can also define the word ‘idea’ as it relates to business or production process.

According to Wikipedia, a business idea is a concept that can be used for financial gain that is usually centered on a product or service that can be offered for money. An idea is the first milestone in the process of building a successful business.

Is it now making sense to you why I said that idea is the capital? It is the first milestone in the process of building any successful business. That means that without an idea there is no business. Before any business you see today came to fruition, it was first an idea in someone’s mind.

Amazon was once an idea in the mind of Jeff Bezos

Are you seeing any pattern here? Everything we have on earth today is a product of an idea. TikTok, Tesla, WhatsApp, Aldi, Twitch, OnlyFans, Apple, Freedom of Speech etc are all products of peoples’ idea.

So truly speaking idea is the capital – the real capital, because it gives every other thing the opportunity to become relevant.

What is Business Capital?

Now, for you to really understand if idea is the capital or not, let’s also see what a capital is. This time we are looking beyond the High school definition of capital as a factor of production.

Since we have started with Collins Dictionary and Wikipedia I will prefer we stick with them even if there are other definitions I would have personally want to explore.

So Collins Dictionary: Capital is a large sum of money which you use to start a business, or which you invest in order to make more money.

And Wikipedia: Capital refers to those durable produced goods that are in turn used as productive inputs for further production of goods and services.

Starting from the Collins definition, did you notice that capital is what you use to start a business? And what did we say about idea earlier? We said that an idea is the first milestone in the process of building a successful business.

Is it now making sense to you that idea is the capital?

Mathematically it can be represented thus:

Capital = What is needed to start a business

Idea is the first milestone of any business

Idea is the capital.

How Can One Get a Good Business Idea?

It is important for me to stress this point that idea is the capital so as to change your orientation and liberate you from that age long thought that it is money that you need to start a business.

The theory of idea is the capital argues that the most important thing required to build any successful business is an idea and not money.

So if I were you I will be more concerned on how to generate business ideas and not how to get money. Of course, I will do so with the full knowledge that idea is the capital.

So here is how to get good business ideas:

How to Turn an Idea to a Viable Business

As an aspiring entrepreneur, here are the necessary steps to turn your idea into a viable business:

Wrapping it Up on ‘Idea is The Capital’

Idea is the capital theory argues that the most important thing required to build any successful business is an idea and not money.

This does not mean that idea alone can guarantee success in business. There are of course several other factors that must be put in place, the entrepreneurs traits are also needed, not forgetting the business model adopted.

But everything starts with an idea, and without an idea there is no business. So in entrepreneurship development always consider the concept of idea is the capital as a guiding principle.

If you have got an idea, don’t let the opportunity of turning it into a viable business to elude you.

Kindly share your view on this and I will be glad to respond.

How important do you think an idea is to the emergence of a business?

And what experience have you had about this?

Is there any idea you currently have and wondering how you can turn it into a business?

Feel free to talk to me today.