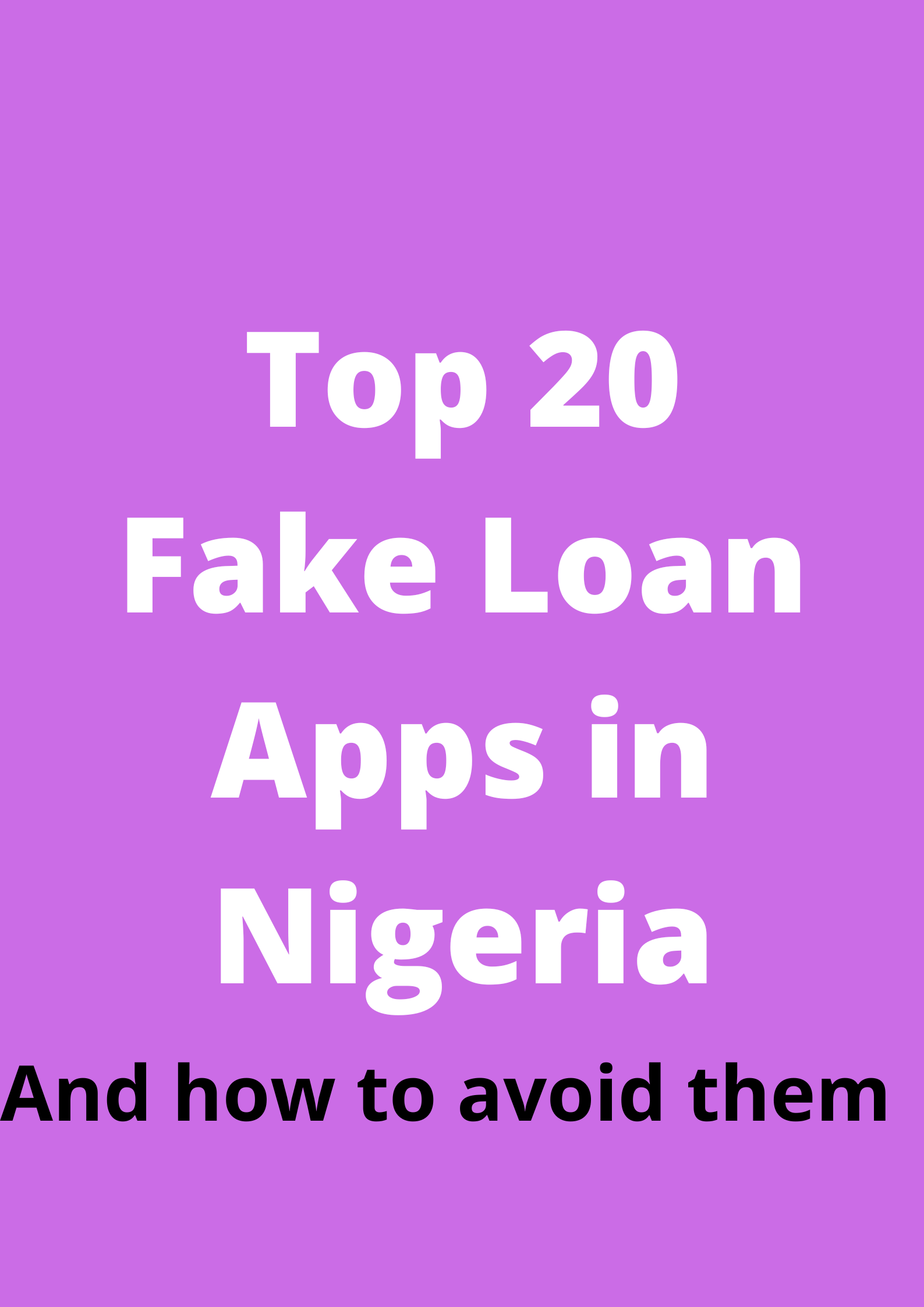 It is not every notification you get on your phone about quick loans that you should take serious. Some of them are fake and scammers in disguise. If you patronise any of them you might be doing so at your risk. And also you must know that each has its peculiar reason(s) why it is described as one of the fake loan apps in Nigeria.

Most of these apps will only waste your time. Some of them will just interact with you to have your private data to resell to third party companies knowing fully well that you won’t get anything from them. Yet, others might pretend to give you loan but the conditions are fraudulent. And some of them are outright fraud simply seeking access to your private bank details.  One thing that is however common among them is that none of them is out to help as them claim.

Lately there have been an increase in the number of these predatory, fraudulent fake loan apps in Nigeria. These are illegal businesses whose sole purpose is to scam poor and hapless borrowers and swindle them of the little money with them. As a matter of fact some of them have become loan sharks terrorizing their victims with extremely high interest rates and illegal down payment before getting a loan.

These fake loan apps in Nigeria are either demanding for illegal security down payment from their potential customers or asking them to pay processing fees for loan. Some others are fond of threatening and blackmailing customers at every given opportunity, insulting and using derogatory words on them. It pains me to the marrow each time I get an SMS from them defaming someone I know personally because he or she has been unfortunate to approach them for a loan. But the truth is that it is what it is – they are fake loan apps. And there is little or no rules in Nigeria to protect victims from their constant harassment.

So what is the way out of this? Simple – know them and avoid them. An Igbo adage says “o bu onye miri huru ukwu ya ka ona eri”. That adage loosely translates to mean “it is someone that the river sees his leg that it will drown”.

So today, I share with you how to identify fake loan apps in Nigeria so as to avoid them.

How to Identify Fake Loan Apps in Nigeria

The interest rate for an average commercial bank loan in Nigeria is 25% percent per annum. Some can charge as low as 18% and some as high as 30 t0 32%. But on the average you will always see something in the range of 24 to 26%. Of course this also depends on the bank, how much you need, your relationship with the bank and then your negotiation skill.

However, fake loan apps in Nigeria charge crazy interest rate. Some of them as high as  72 to 180% per annum. But you see the way they disguise it some persons that are not familiar with bank numbers will not know. They will tel you that their rate is 7%. And they won’t say beyond that. But the 7% is actually per month. So the annual interest will eventually become 84%. Some will even be bold enough to tell you they charge 15% per annum. Once you see such ridiculous interest rates it should be a red flag for you to know that such is one of the fake loan apps in Nigeria.

Another signal about fake loan apps in Nigeria is that most of them have no office address on their website. Yes, they know that their operations are not straightforward so they avoid giving out any information that will make it possible to track them physically. Of course they always defend this nebulous stance by claiming that as a 100% online business their physical address is not necessary. And even when they put up an ‘address’ you will search for such address till eternity and you will not find it because no such place exists anywhere in Nigeria.

List of Zenith Bank MDs Since Inception Till Date

Of course being registered with CAC is no proof that a company is genuine at all. After all, most of the companies including ponzi schemes that have dubbed people of hundreds of millions are all registered with CAC. In fact when you get to their offices the first thing that will greet you is a well enlarged CAC registration certificate. But this does not make them genuine.

But having said that, let me also say that anyone branding as a loan app without CAC registration is most likely going to be fake. CAC registration is the place to start. It should be the minimum requirement for operating any business in Nigeria.  In fact, according to the act establishing CAC, CAMA 1990, no business entity is recognized without a formal registration with CAC.

And some of the fake loan apps in Nigeria claim to be registered with CAC whereas they are not. Such fake companies forge RC or BN numbers and put them up on their websites. They call that smartness. But I expect you to at least be able to outsmart them by simply checking out if their CAC registration is genuine or fake.

This is another easy way of knowing one of the fake loan apps in Nigeria. The fake loan apps in this category will actually give you the loan but with conditions that will make your life miserable. Explain to me why a company that claim to want to rescue you from a difficult situation will give you a loan and ask you to return it in 7 days with 20% interest? That is simply unrealistic. And that is exactly the the premise under which ponzi schemes operate but in the reverse order.

In fact Google has a policy that for you to have your app published on playstore as a personal loan app that the repayment period must not be 60 days or less. So any loan app that is asking you to repay in 7 days or even one month is already running foul of the playstore rules. And that is enough to classify it as one of the fake loan apps in Nigeria.

This is another sign that a company is one of the fake loan apps in Nigeria. They can put out a phishing website. Some other ones give out insecure Url and as you enter your private information like passwords or card PIN they easily steal them and from that all your money might be gone in a second. For you to know a website that is insecure simply check the url for https. If the website has http without the ‘s’ don’t do anything serious with it.

FYI: A phishing website is a domain similar in name or appearance to an official website but ade specifically to fool the public into believeing it is legitimate.

Another red flag to know a fake loan app in Nigeria is when they start demanding you pay money before you can get the loan. Most of them give different innocent names like ‘card verification fee ‘or ‘loan processing fee’. But the bottom-line is that it is a scheme to defraud the unsuspecting customer.

Looking to fund your ideas?

I think this is perhaps the most common strategy of the fake loan apps in Nigeria. What they do is that they make everything look real. Then you follow the prompt in an attempt to get a loan. From there you will submit all information including sensitive information. Then at the last minute they will run a check and say ‘you did not qualify for loan’. But the truth is that they didn’t plan to give you the loan in the first instance. They only want to harvest your details and sell to 3rd party companies.

We all know these one already. If you plan to do a serious business with any loan app in Nigeria or you are simply trying to verify if such is one of the fake apps in Nigeria I recommend you read up some reviews online or directly on play store. If you do you will be able to judge for yourself based on what people that have used the app are saying.

From my personal research across different platforms here is a list of top 20 fake loan apps in Nigeria. My advice is that no matter how desperate you are about taking a loan, that you should avoid these ones.  Many unsuspecting customers and borrowers have been scammed and defrauded. While others have had their bank accounts illegally debited by these fraudulent online loan apps.

The list of fake loan apps in Nigeria are:

I was inspired to write this post after someone called me that he wants to take a loan from one of this loan apps. I tried to discourage him by sharing the disadvantages of taking a loan from them, he agreed but insisted that he wants to go ahead. Why? He was in a very tight corner and his options were limited. It shows me that with the present situation in the country most people have become desperate and hapless financially. They are willing to accept virtually any condition just to meet basic needs. And I completely understand that.

Stay with this blog and I will be bringing you comprehensive review of each of these fake loan apps in Nigeria.

Have you had an experience with any of them? Feel free to share also.

Countries Where You Cannot Renounce Your Citizenship

How to Renounce Nigerian Citizenship

Easiest Countries to Get Citizenship