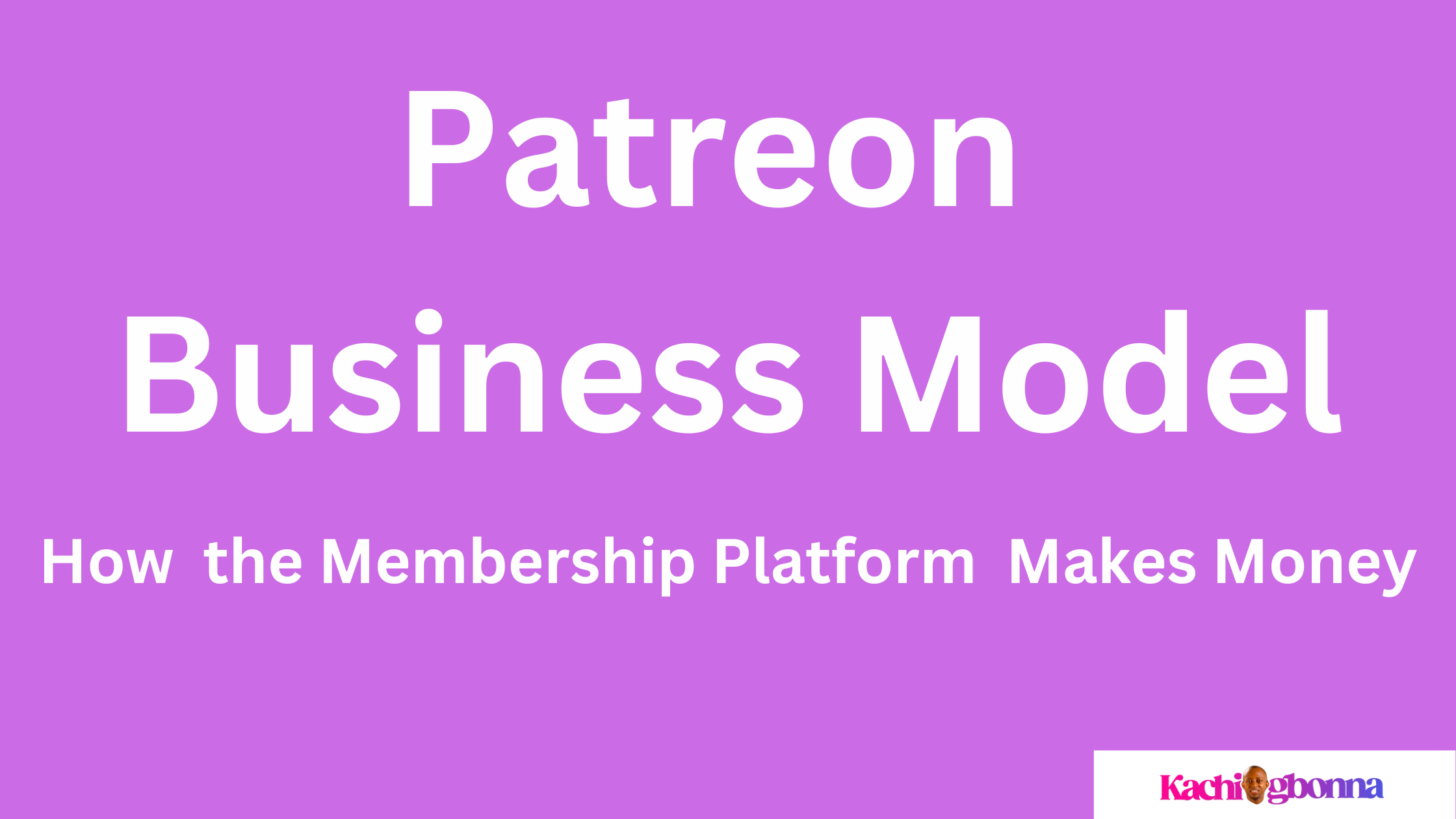 Patreon business model – how they make money in 2023

For almost three decades now, the Internet has turned art into ‘content’ to run ads against. And the big brands has made users believe that all those contents are free.

But are they really free?

It was Tim Cook who once said that if an online business is tagged free, then the users are actually the products and not the customers. This model drives ad revenue in the billions of dollars, with only a tiny fraction of it shared with the creators. This is the model used by popular platforms like Facebook, YouTube, Google, TikTok and many others.

But one company believe that such is an unfair model. And that company is Patreon. They believe that Creators deserve more and should be rewarded fairly for making the world a livelier, more beautiful and more interesting place.

This is why Patreon business model allows creators to engage in a direct, value-for-value exchange with the people that love their work the most. This is a similar model to that of OnlyFans where the creators are in-charge of what they earn.

So today we are taking an in-depth analysis of the Patreon business model and how the company makes money.

Patreon is an American-based membership platform. It allows creators make money by providing membership options to their fans and supporters. The supporters on the platform are referred to as Patrons. Patreon business model enables it to makes money by charging a fee when creators earn from the Patrons.  The money Patreon earns is based on three levels or plans from which creators can choose (Lite – 5% fee, Pro – 8% fee, and Premium – 12 % fee).

Patreon works together with a variety of content creators, including podcasters, YouTubers, nonprofits, musicians, local businesses, and much more.

Patrons are willing to pay and in exchange they receive the following from the creators:

Patreon can be accessed via the company’s website as well as its mobile phone applications. It is available on both Android and iOS.

Patreon business model will make more sense to you if you understand how or why the company started in the first place. For that reason, before we proceed to sharing more on how it works and how it makes money, we shall first get a brief insight into how the company started.

The company was co-founded in 2013 by Jack Conte (CEO) and Sam Yam (CTO). Conte in particular (a musician) was seeking to make a living from his YouTube videos. However, he believed that content creators on YouTube with large audiences were not being paid enough for their work.

Background of the Founders

Both founders had their education at Stanford (where they were roommates and ultimately became friends), yet their paths prior to launching Patreon couldn’t have been more different.

Yam, on the one hand, continued his Stanford studies, pursuing a Master’s in Computer Science.

He eventually took a leave of absence and became one of the first developers at the social-mapping startup Loopt. He equally contributed to founding Adwhirl and OurSpot in addition to his exploration of a few other ideas.

Conte, on the other hand after wrapping up his Music studies at Stanford, went on to work as a full-time musician. In 2008, he started a band with his then-girlfriend (and now wife) Nataly Dawn called Pomplamoose.

The duo quickly made a name for themselves, amassing hundreds of thousands of followers on various platforms such as Spotify. They even received offers from various major labels but decided to remain independent.

Unfortunately, life as an independent artist isn’t as glamorous as it always sounds. So within just a few years into their music careers, the pair grew increasingly frustrated with the small amounts of ad revenue they were generating from their music videos.

That frustration reached its all-time peak when Conte launched a music video named ‘Pedals’, which cost him $10,000 to make (and maxing out his credit cards at the same time) only to receive a few hundred bucks in return.

It was obviously the lack of earnings that led Conte to start working on the concept for Patreon. He was very clear on the idea of what he wanted to build. But he didn’t have all the technical know-how required. So, it was at that point that he reached out to his old roommate Yam, knowing that he would need some technical prowess to build his idea.

Patreon launched to the public in June 2013. That same month, mainly due to Yam’s connections in the Valley, the team was able to raise a $700,000 seed round (valuing Patreon at $5.5 million).

Within a year the company amassed more than 100,000 users. And by 2014, Patreon’s team added another $2.1 million and $15 million to the startup’s balance sheet, respectively.

Looking back at the exponential growth recorded by Patreon, it is clear that what allowed them to grow the way it did was (and still is) its obsession towards serving their creators. In 2017, for instance, the company launched a Salesforce-like CRM tool for creators, allowing them to assess how well they perform (and find means for improvement).

The continuous growth put the company on the startup map – and subject to copycats. Most notably, in 2019, Facebook introduced its own fan support service. The new product was directly embedded into the content and allowed page owners to ask their followers for support.

Patreon Business Model – How it Works

Patreon is the world’s leading creator platform that makes it easy for creators to get paid. For creators, Patreon is a way to get paid for creating the things you’re already creating. It could be webcomics, videos, songs, podcasts etc. For Patrons engagement, they can pay as low as $1 per month to have access to contents. As a creator you can also choose to charge per post you release.

As at 2021 creators around the world have earned more than $3.5 billion from Patreon.

Yes, there are two key stakeholders of the platform; the creators and patrons (creators’ supporters). Thus there is a strong value proposition that appeals to each of the two groups.

Just as in OnlyFans, Patreon allows creators to monetize their content by creating a paywall and charging patrons a subscription fee to access their work.

For content creators, the advent of the internet has made content creation a career of choice. Distribution and earning attention became more accessible than they had ever been.

The burst in internet gave rise to new professions like podcasters, gamers & solo journalists. And at the same time provided a boost to older professionals like writers, musicians & visual artists.

But like most other things in life, it came with its own set of disadvantages. A major advantage is that creators could monetize their craft on ad-supported platforms, but they had no say in defining how much such contents are worth.

This is part of the problem Patreon came to solve.

The Patreon business model is comparatively simple especially when it comes to the way they make money. It only makes money when its creators make money.

The first component of the Patreon business model is based on the fee the company charges creators.

When signing up for the platform, as a creator, you have a choice of three plans:

So the following are ways through which Patreon business model brings revenue to the company:

It’s important to note that there are over 3 million patrons on Patreon. Each can sign up for a support plan of which the features and exact price are determined by the creator.

When a patron elects to financially support the work of an artist, Patreon gives 90% of the amount pledged to the creative. The remaining 10% is taken as a cut, with 5% constituting a platform fee and 5% in processing fees.

In addition to charging the creative a subscription fee, Patreon also collects a payment processing fee for accepting patron contributions on their behalf.

Why is Patreon So Popular Today?

Patreon’s goal of empowering creators to build communities with their fans has partly been so successful becausethey have created their own community of creators, allowing them to foster a strong emotional connection with their clients.

Also key to the growth and popularity of Patreon is its transparency in dealing with creators.

According to a report by similarweb 28.85% of Patreon users are from the US. 5.66% are from the UK, while the third highest users comes from Germany with 4.31%

Below are some staggering statistics that shows how well the Patreon business model is performing:

Led by True Crime Obsessed (with 49,501 patrons) and The Tim Dillon Show (with 42,674) the following are the top Creators on Patreon:

Is Patreon Available to Nigerians?

Yes, Patreons are available to creators in over 200 countries of the world. And Nigeria is among the countries where Patreon is available.

As a creator looking for how to monetize your contents and have complete control over your earnings, Patreon is the platform to be. It is 100% focused creators platform and there is barely any decision or policy made without seeking the opinion of creators.

There are three tiers of membership that a creator can sign for; Lite Pro and Premium. Each of this has the percentage Patreon can take from the revenue creators earn. But the highest is 12%, and it can be as low as 5%. This means that Patreon business model allows creators keep as high as 95% of their earnings. Which platform beats that?