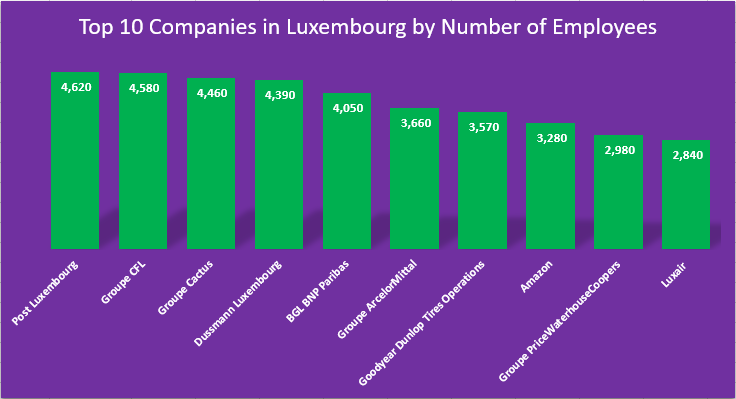 Top 10 companies in Luxembourg by number of employees.

To complete the list are other multinationals including Amazon, PcW and Luxair.

So we shall look in details at the top 10 companies in Luxembourg by the number of employees according to Statista.

Top Companies in Luxembourg By Number of Employees

Post Luxembourg is the largest employer of labour in the country. It employs at least 4,6200 people as at January 2022, it could potentially be more according information available at the company’s website. The formal name of the company is Entreprise des Postes et Télécommunications.

The mail and telecommunication company was founded in 1842 as a government owned corporation. But in 1992 it was converted to an independent commercial company and renamed Post.

It was founded in 1946 and serves parts of neighbouring countries like Germany,  France and Belgium in addition to covering everywhere in Luxembourg. Meanwhile the company has a total staff strength of 4,580 people.

Cactus is another in the list of the top 10 companies in Luxembourg. It is clearly the leading retail group in Luxembourg controlling as much as 50% of the market share. As a group it specializes in the running of supermarkets. But it also has two hypermarkets; one in Bertrange and another in Bascharage.

Cactus started as a grocery store in 1900 with the founder being Joseph Leesch. In 1905 he added wholesale operations in partnership with Michel Donven.

As far back as 2006 the company reported a turnover of 750 million euros.

It is the third largest employer of labour in Luxembourg with about 4,460 employees.

The Dussmann Group with a tagline ‘Excellence at hand’ is the company that prides itself for perfection in all four business activities. The company is active in 21 countries around the world and employs over 60,000 people. However, in Luxembourg where it has its headquarters (in Contern) it boasts a local workforce of 4,390 (the company website says 4,400) people. And the company has been established in Luxembourg since 1978 with a

The four core business activities of Dussmann that makes it one of the top companies in Luxembourg are:

But there is also Dussmann Corporate. The company which started in Luxembourg in 1978 is led by a senior management team that believes in building customer focus and actively ensuring on-the-ground presence. And that team is headed by the Group CEO Jean-Paul Neu.

BGL BNP Paribas is founded on 29 September 1919 is the fifth largest bank in Luxembourg. Since May 2009, the bank has been a member of the BNP Paribas group.  It is one of the highest employer of labour in Luxembourg with a staff strength of about 4,050.

The company was formed in 2006 from the takeover and merger of Arcelor by Indian-owned Mittal Steel. ArcelorMittal has operational offices across 60 countries globally and employees over 168,000. But in Luxembourg it employs 3,660. The company declared a revenue of $76.57 billion in 2021 with a net income of $14.96 billion.

For many decades Goodyear and Dunlop were individually heavyweights in the tyre manufacturing business. However, the two companies recently merged to form one of the largest tyre manufacturers in the world. They together own the brands Dunlop, Goodyear, Fulda, Falken and Kelly. Meanwhile, In Luxembourg they are one of the top companies employing 3,570 people as of 2021.

Luxembourg is said to be one of the most interesting countries where Amazon staff choose to work. Quality of life, location within Europe, a diverse and expat-friendly culture, and an international education for children, are just some of the reasons why skilled and innovative colleagues choose Luxembourg. The salary is also quite impressive. Meanwhile as of 2021 the company employs about 3,280 staff in Luxembourg.

FYI: Other members of the big four are KPMG, Deloitte, Ernst & Young (EY), with PwC completing the list.

However, with 2,980 people (the company’s website actually reads “over 3,000 as of January 2020“) employed from 77 different countries, PwC Luxembourg is the largest professional services firm in the country. And that equally places PcW Luxembourg as one of the top ten companies in Luxembourg in terms of the number of employees.

As at 2022 Luxair is Luxembourg’s only passenger-carrying airline offering regular, non-charter service. It was founded in 1948 but resumed operation in 1962. As of 2019, it does an average of 2.14 million people annually across 85 destinations across the world with 535 million euro turnover. And has about 2,840 employees which makes it one of the top companies in Luxembourg.

Across different sectors you find heavyweights employing thousands of people in Luxembourg. From the service sector, to banking, to transport to manufacturing there are high profile job opportunities for skilled workers in Luxembourg. So, if you are an immigrant looking for opportunities in Europe, Luxembourg can be a good option to consider. In fact, there are so many other benefits of living in Luxembourg like the free public transport for all.

CBN Approved Payday Loan Companies to Save You When Broke