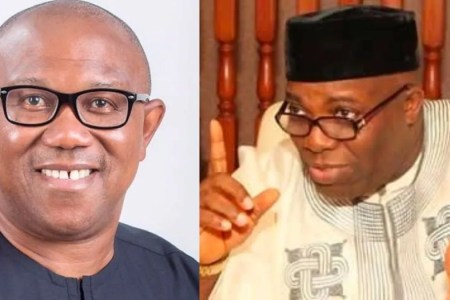 What is Placeholder in Political Parlance?

In What Situation is it Applicable?

The situation often occurs in cases where a  political office holder especially an elected officer dies in office or leaves before the expiration of their term. In such a situation the constituency the person represents or a higher political officer appoints someone to fill that vacancy temporarily. Key point here is that the placeholder agrees not to seek election full-time.

Is Placeholder Used in American Politics?

Examples of Placeholder Applications in America

1. After the resignation of Senator Mel Martinez of Florida, Florida Governor Charlie Crist appointed his chief of staff George LeMieux to the vacant Senate seat, which Crist ultimately ran for.

Tinubu submits a Placeholder Candidate as a Running Mate

Desperate to beat the deadline set by the Independent National Electoral Commission (INEC), presidential candidate of the All Progressives Congress (APC), Bola Ahmed Tinubu, has quietly submitted his forms, with the inclusion of a ‘placeholder’ as running mate.

An insider in the ruling APC told Journalists in Abuja that the action by Tinubu and the APC was aimed at meeting the statutory requirement and beat the Friday, June 17, 2022 deadline by INEC for presidential candidates to submit names of their deputies to the commission.

The Choice is Yet to Be Resolved

But the choice of running mate is yet to be resolved hence the decision to include a placeholder instead as vice-presidential candidate, while Tinubu and the APC were still making consultations for a suitable deputy that would enhance the party’s victory in 2023.

The controversy over the suitability of the APC running with a Muslim-Muslim ticket or otherwise, has been very intense in the last few days.

“The candidate is still widely consulting, because the issues around the choice of running mate are many and he is yet to address them all. So, he is still asking for more time to look into it all – whether he is running a Muslim-Muslim or a Muslim-Christian ticket.

“He personally thinks there’s a need for more consultation and that’s what he is doing. The debate on the choice of deputy has assumed a level that is currently greater than the party and the candidate, hence the need for comprehensive consultation, which is what he is doing,” a reliable party source hinted Wednesday night.

Though some names had been mentioned as possible running-mate to the former Lagos state, it was gathered that no compromise has been reached yet.

All Northern Governors Want The Position

A source in Tinubu’s camp told THISDAY Newspaper that all the northern governors want the position.

The source added that if Tinubu had his way, he would have loved to pick the former Governor of Borno state, Kashim Shettima as his running-mate, but he wanted the president and the governors to pick.

The source said: “All northern governors want it. If Tinubu has his way, it will be Senator Kashim. But he wants the president and governors to pick for him.”

Asked why Tinubu does not want to pick his running mate himself, the source stressed he didn’t want to be a winner takes it all.

“He does not want to be the winner takes it all. You need to respect the president. Buhari did not choose VP for himself in 2015.”

But for the time being Kabiru Masari has been submitted to INEC in Placeholder capacity.

Labour Party and Their Presidential Candidate Mr. Peter Obi yesterday also submitted a Placeholder Candidate as a running mate for the 2023 presidential election. Former presidential spokesperson Dr Doyin Okupe on Friday said he is ‘standing in’ as vice presidential candidate of the Labour party.

He made the announcement on Channels Television’s Politics Today.

If his candidacy holds, he will run alongside Peter Obi in the 2023 presidential elections.

However, Labour Party later confirmed through a series of tweets that Dr Okupe is just a placeholder to beat INEC’s deadline for the submission of the name of a vice presidential candidate.

All Political Parties have till July 17, to make the final substitution if necessary for their Presidential and Vice Presidential Candidate.

Why is The Issue of Running Mate Proving Difficult?

The issue of running mate is really becoming tricky for this general election. Each of the major political parties understand the choice of a running mate is now very crucial. For this year it is not just going to be a make up position. In fact, it could potentially become the x-factor to tweak the game in any party’s favour.

As at the last time we checked, Peter Obi and Labour Party are still negotiating with Kwankwaso. It appears there is yet to be a conclusion which has led to a Placeholder.  They might want to explore more options in order to present a more sellable candidate to the voting public.

In the same vein, Tinubu and APC seems to be in dilemma as all the preferred Northern options are Muslims. And the issue of Muslim-Muslim ticket may hurt the party.

PDP however don’t seem to have any such problem as their candidate is settled already.