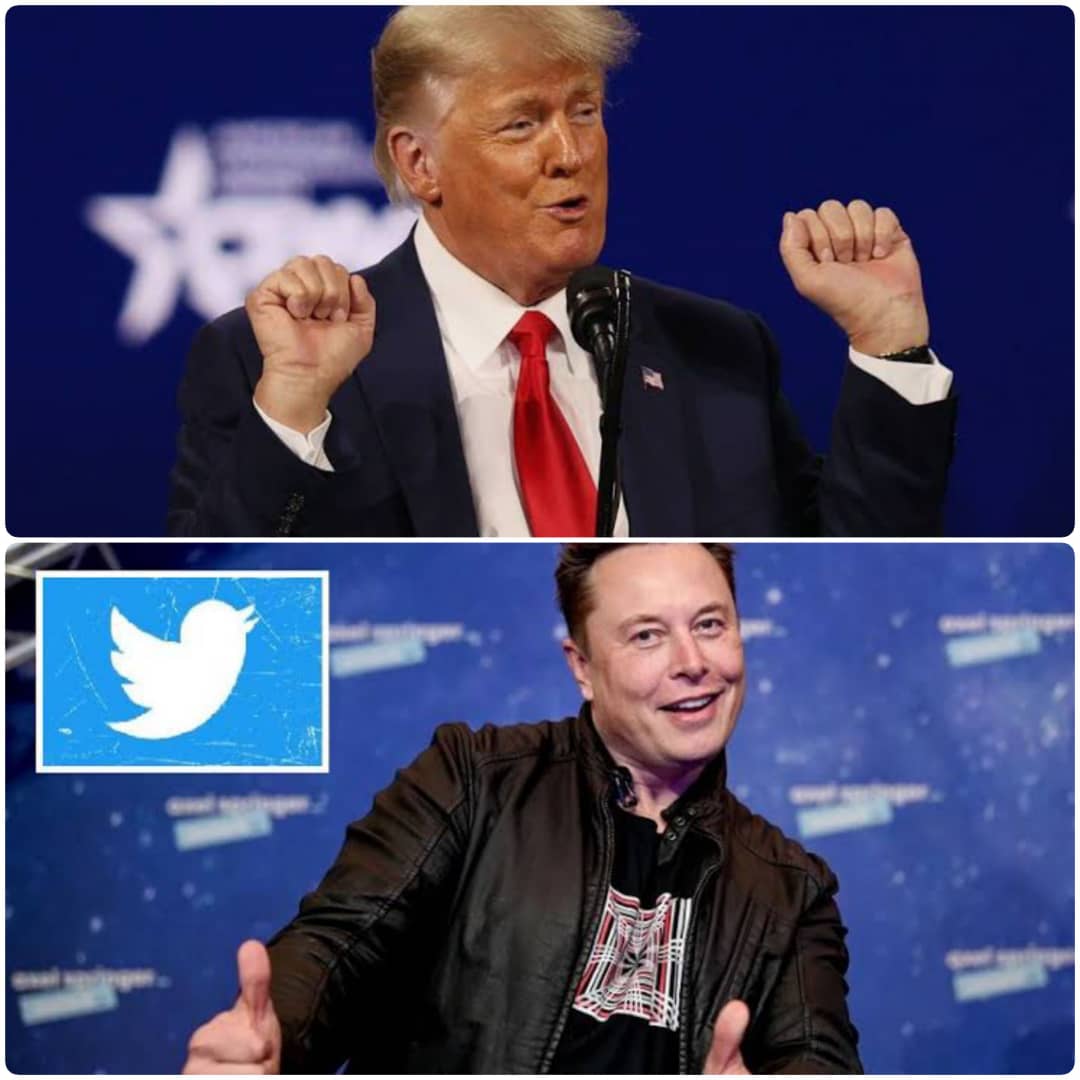 Elon Musk, the wealthiest man on earth on Monday secured the $44 billion cquisition of popular social media platform Twitter. From the day he submitted his first bid he has maintained that he wants to use the platform to promote free speech and democracy across the world. But could there be more to why Elon Musk bought Twitter? It took him just 11 days from that first bid on April 14, 2022 to have it accepted on April 25, 2022.

The Untold Story of Why Elon Musk Bought Twitter

Below are the 4 unsaid reasons why Elon Musk bought Twitter:

The build up to the 2020 American presidential election generated heated debate on Social Media. There were allegations that those in control of most of the media houses favours the candidate of Democratic Party. That accusation was led by no other person than the candidate of Republican Party himself Donald Trump. According to the official result released by the electoral umpire Trump lost the election. And the build up to the hand over witnessed some crisis. And following the January 6, 2021 invasion of the U.S. Capitol Trump was banned by the major social media platforms including Facebook, Instagram and Twitter.

That ban was an eye opener for most American billionaires including Musk.  In fact after Twitter banned Trump over concerns around incitement of violence following the U.S. Capitol attack by his supporters, Musk tweeted: “A lot of people are going to be super unhappy with West Coast high tech as the de facto arbiter of free speech.” Many people interpreted that tweet to mean his public sympathy for Trump.

Why Elon Musk bought Twitter 2: He fears that it can happen to anyone

If these guys can shut the voice of American president, supposedly the most powerful man on earth that speaks volume. It means that Mark Zuckerberg and co are probably more powerful than we think. That means that beyond making billions off everyone else they also have the power to control peoples’ minds. They can literally influence election results around the world. Social media and its bias actually contributed in ousting Donald Trump from the White House. That means they can even wake up one day and ban Elon Musk from speaking up too. And Elon don’t like that. Elon can’t guarantee that he will not say something that they will interpret to be offensive.

Even a tweet by President Muhammadu Buhari, the president of Nigeria, the most populous black nation on earth was once deleted by Twitter. Of course that angered the government of the country and led to the suspension of Twitter operation in Nigeria for seven months. But these things clearly shows that Social Media and their owners are actually more powerful than we thought.

When on August 28, 2021 Twitter announced a ban on the account of former New York Times journalist and conservative author dubbed “the pandemic’s wrongest man,” Alex Berenson many of his critics cheered. But others, including some who oppose his views, raised concerns about a world in which private corporations – taking their cues from mainstream media and government officials – can silence dissenters in today’s digital public square.

Mark Zuckerberg for example was becoming more powerful by the day with his control of Facebook, Instagram and WhatsApp and it is obvious he wants to acquire even more. So this is actually why Elon Musk decided to buy Twitter ‘at all cost’.

Why Elon Musk bought Twitter 4: The best form of defense is attack

It is always said that the best form of defense in any game is attack. If you retreat and allow your opponent come at you, he will pin you to the wall. But if you want to give yourself any chance of success then you must take the war to the camp of the enemy. And that was exactly what Elon Musk decided to do.

Not to allow what happened to Trump, Alex and others to happen to him Elon decided to enter the game of owning a social media platform. He could have built one if he choose to. He has everything it takes so to do. But he choosed rather to buy an existing one and a very powerful one at that.

Though Twitter with 200+ million accounts represents just about 10% of the total accounts that Facebook holds yet it has a way of influencing major world events.

So Elon Musk went all out and bought Twitter to control things himself thereby burying any chance of been the victim.

Here are 6 things to expect in Twitter with Musk as the new owner:

The world richest man describes himself as a “free speech absolutist”. And he has criticized what he view as excessive moderation on online platforms.

In his statement announcing why he bought Twitter Elon Musk said that “free speech is the bedrock of a functioning democracy, and Twitter is the digital town square where matters vital to the future of humanity are debated.” 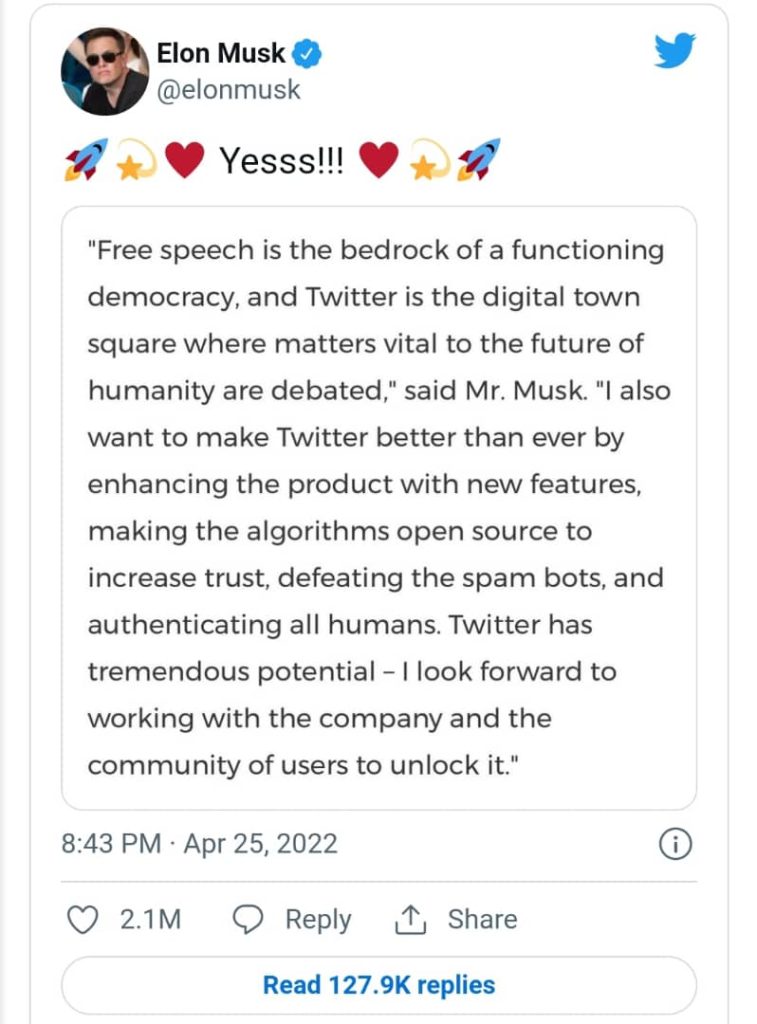 The Tesla and SpaceX has argued that comments that are not against the laws should be allowed to remain by social networks even if such comments are offensive. Of course, to him the term ‘offensive’ can be subjective. In an interview recently at a TED conference he said, “If it’s a gray area, let the tweet exist.”

Twitter currently bans tweets with intent to harass, abuse or cause physical harm to someone. The platform has other restrictions, like a prohibition on misinformation related to COVID-19.

Musk, who is worth $268 billion according to Forbes, has said he is not primarily concerned with the economics of Twitter.

But how Musk intend to achieve his much talked about freedom of speech without giving license to harassers, trolls and bullies is yet to be known.

One of the most popular requests on product changes among Twitter users for years has been an edit button.

Unlike Facebook, Instagram and other social media apps, once you publish anything on Twitter it is impossible to alter it. So even if there is a typo in your tweet, as long as it has been published, it is either you delete it or it stays.

Musk has in the past said he supports letting people edit their tweets. Now that he is in charge he might yet consider it a top priority.

Open up Twitter’s algorithm to the public

Musk has said that the software that determines what people see and how widely content spreads on Twitter should be cracked open. He supports placing Twitter’s algorithm on GitHub, a site popular with programmers for sharing computer code.

This might mean a big opportunity for software developers.

Combating the proliferation of bots

Combating the proliferation of bots on Twitter. He wants to make as many accounts on Twitter as possible to be truly human. Currently there are lots of fake accounts that are programmed to respond to tweets on certain topics.

Musk hopes he can achieve this as quickly as possible or die trying.

“If our twitter bid succeeds, we will defeat the spam bots or die trying!” Musk tweeted last week, adding that he’d like to “authenticate all real humans.”

Musk once twitted in support of the removal of all ads from Twitter, saying, “The power of corporations to dictate policy is greatly enhanced if Twitter depends on advertising money to survive.”

He rather supports the migration to a subscription based model.

Twitter has already taken some steps in that direction with the introduction last year of Twitter Blue, a premium service that cost $2.99 a month for addition features, like an undo button that allows for tweets to be recalled before they are sent. Though Musk is of the opinion that it shouldn’t cost that much.

So we wait and see if Musk will go ahead and remove all ads from Twitter.

Right now, almost 90% of Twitter’s revenue comes from advertising, but the company has struggled to attract advertisers to the platform, which often devolves into political firestorms and online banters.

And a big one: will Donald Trump return?

Musk has not yet announce any plan of allowing former President Donald Trump back on the platform after the company permanently suspended him over alleged rhetoric that broke its rules and caused the violence of the U.S. Capitol on January 6, 2021.

In fact Trump has publicly said that he has no plans to try to return to the social media platform. Instead, Trump said he will be focusing on his alternative social network known as Truth Social.

At an all-hands meeting on Monday afternoon, a Twitter employee asked CEO Parag Agrawal whether Trump would be reinstated. Agrawal said that was a question for Musk.

“Once the deal closes, we don’t know which direction the platform will go,” he said.

So we wait to know if Musk has any plan to bring him back. And also if Trump will accept. But if Trump does come back it will be another big statement by Elon Musk on why he bought Twitter.