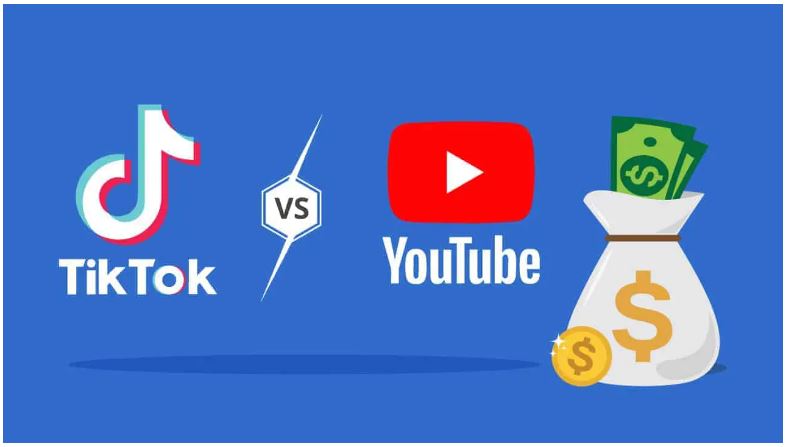 Youtube vs TikTok: Which one pays better and which should you concentrate more on?

FYI: This post is for video creators that are looking for better ways to monetize their videos online. And the fight is obviously between YouTube vs TikTok

YouTube is a free video sharing website that makes it easy to watch online videos, like, comment and share them. But you are not only meant to be a consumer on Youtube. Yes, you can watch as many videos as you want for free, but you can also create your own profile and upload your own videos so that others can watch and share as well. Uploading videos on YouTube is free. And so is watching videos on YouTube.

Don’t forget you can monetize your YouTube videos. I will come back to how you can do that later.

And what is TikTok?
TikTok is a popular social media app that allows users to create, watch, and share short (15 – 60 seconds) videos shot on mobile devices or webcams. Watching and uploading videos on TikTok is equally free. And once again you can monetize your videos on TikTok.

For How Long Has YouTube and TikTok Been Around?

Today we are doing YouTube vs TikTok comparison, especially in terms of earnings, but is there really any basis for that? Let’s start from tracing their age.

PARTNERSHIP LESSONS FROM CUBANA CHIEF PRIEST AND J. I. EJISON

I BLOGGED FOR 4 YEARS WITHOUT MAKING ONE KOBO – LINDA IKEJI

KEVIN DAVID LEHMANN, THE WORLD YOUNGEST BILLIONAIRE AND THE SOURCE OF HIS WEALTH

YouTube was first launched on February 14, 2005. That means that as at the time of writing this article YouTube is already 17 years old. It was founded by three former PayPal employees—Chad Hurley, Steve Chen, and Jawed Karim– in February 2005. However, in November 2006 (just 21 months after launching) Google bought the site for US$1.65 billion (this Google sha..). Since then, it operates as one of Google’s subsidiaries.

The first ever video on YouTube was uploaded 2 months after the site was launched on April 23, 2005. The 18-second video was by YouTube co-founder Jawed Karim titled ‘Me at the Zoo‘. You can watch that video here.

Before YouTube there were a few other online video sharing platforms here and there like  Shockwave Player, MPEG-4, MindGeek. But the one that came closest to becoming a real success was ShareYourWorld.com, founded in 1997 by Chase Norlin, but it subsequently shut down in 2001.

And for how long has TikTok been around?

It is rather ironic that today the platform we are comparing with YouTube of all the online video sharing platforms that have come and gone is the one founded 11 years after YouTube launched.

TikTok was created by Chinese tech giant ByteDance and was first released in September 2016 under the name “Douyin”. Douyin was marketed as a video-sharing social networking service similar to Facebook and Instagram (both of which are banned in China). In November 2017, ByteDance acquired another social media app called Musical.ly. Musical.ly allows users often referred to as “Musers” to create and share short 15-second lip-sync videos on their platform. ByteDance eventually closed down the Musical.ly app and incorporated most of its features into Douyin. Then in August 2018, ByteDance released the global version of Douyin called TikTok. One of the main attractions of TikTok is its elaborate algorithm that quickly figures users’ tastes and preferences based on how they engage with the app

The requirements for applying to the YouTube Partnership Program (a program that allows its creators to generate revenue through advertisements) are quite simple. You need to have at least 1,000 subscribers and accumulate more than 4,000 valid public watch hours in the past year. Valid public watch hours are the total amount of hours people have spent watching your public videos. Equally is that content creators need to follow all the YouTube channel monetization policies. The YouTube Partnership Program covers 102 countries/cities worldwide. So you have a sizable chance of joining YouTube partnership irrespective of your country.

And who can apply for TikTok Creators Fund?

Just like in YouTube the reward arm of TikTok is called  TikTok Creator Fund. And it equally have some requirements before one can join. First, applicants need to have at least 10,000 followers and accumulate at least 100,000 views over all of their videos in the preceding month. They also need to have an account that fits with the TikTok Community Guidelines and terms of service. The TikTok Creator Fund is currently available only in the U.S., the U.K., Germany, Italy, France and Spain. So if you are not from one of the above six countries, you cannot access the TikTok Creator Fund, which puts many creators worldwide at a disadvantage.

FYI: The above criteria is for those that want to earn directly from the platforms, that is YouTube Partnership Program and TikTok Creators Fund. It does not include the other ways of earning from the platforms like sponsored posts, promotions, ambassadorial deals, affiliate marketing etc.

How to Make Money on TikTok

There are many ways through which one can make money on TikTok. Below are the 10 most popular ways:

The details of how you can make money from each of the options listed above have been thoroughly explained in this post – how to make money on TikTok.

Analysts believe that one of the things that made TikTok a global success is the ‘short video’ formats they insist on. We are living in a generation where the attention span is reducing by the day. The 21st century customer is so lazy, busy and crazy at the same time. It has been observed that most people would rather watch 10 videos of 60 seconds each (total of 10 minutes) than watch one video that is 5 minutes long.

So when TikTok came with their idea of 15 – 60 seconds video it was the perfect fit for this generation. So there was an understandable migration from YouTube to TikTok by many people. In fact the effect was so obvious that YouTube had to respond. And what did they do? They launched YouTube Short. And that brought the competition back.

Here are similarities between TouTube Short and TikTok

Well, put YouTube Short aside for a minute. Let’s look at YouTube as it were and compare it with TikTok. So what are the differences between the two awesome platforms? Let’s explore this together. The table below gives us all we need to know:

23 year old MrBeast was the highest YouTube earners in 2021, earning a record $54 million. No one has ever earned more than that in a calendar year. To be able to amass this amount his videos recorded a total of 10 billion views. In fact 2021 was a very rewarding year for youTubers- the top 10 earners combined to take home over 304 million dollars. Once again there has never been a better year in YouTube.

Similarly, TikTok earners all improved on all sides. Charli D’Amelio has the top spot in TikTok with$17.5M.

Below is a full comparison of the top ten earners of YouTube vs TikTok.

Let me not bias your mind. I have given you a fair and unbiased analysis of each of the 2 platforms. Now in your opinion which do you think pays better? As a content creator which of them would you rather focus on? From the type of videos you create which of them do you consider more appropriate for you? I will like to have your opinion on this. And the comment session is open for you to drop your view points. In fact this conversation of YouTube vs TikTok is one I will like to have with you.

Still want to get my personal verdict on YouTube vs TikTok – which one pays better?

Okay, here is the thing:

YouTube has been around for much longer before TikTok came. In fact YouTube already over  billion users before the launch of TikTok. So it is normal that it should have some edge when you do the YouTube vs TikTok analysis. In fact, as you can see above the differences is not just in how much they pay of their monetization startegies but in the entire platform architecture and usage. However, the simple fact that we are doing this YouTube vs TikTok analysis (which actually is a major debate online today) is a testament that TikTok i doing something right.

But in general if you want to earn money online with your video contents it does appear as if YouTube pays more and makes it easier to start. But even if you are not qualified for TikTok Creator fund or your country is not yet in the list it still provides you many other options for earning.

I hope this helps you to start off your journey to making money online with your video contents. Or perhaps you are in the business already, then improve your strategy and earning.

IGBO APPRENTICESHIP SYSTEM: A SOLUTION TO GRADUATE UNEMPLOYMENT IN NIGERIA

HOW SWEET SENSATION STARTED FROM A GATEMAN’S HOUSE